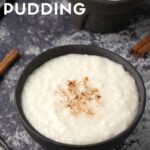 Creamy vegan rice pudding that tastes like a delicious custard! Divine served with a sprinkle of cinnamon either hot or cold.

Seriously, even if the words rice and pudding don’t sound like they should go in the same sentence, you’ll be a convert once you try this.

It’s made with coconut milk for a really rich and delicious pudding. It’s extremely simple, but takes a while to cook as you’re basically turning grains of rice into creamy custard, so it cooks for around an hour in total.

So it’s not super quick, but it is absolutely delicious. You can also serve it hot or cold, so the batch of rice pudding that you make today can be your puddings for the week!

And if you love this vegan rice pudding then you’ll also love our vegan vanilla pudding and vegan chocolate pudding.

Coconut milk creates such a rich and delicious rice pudding, I highly recommend it.

You might be a little shocked by the amount of coconut milk that goes into this (4 cans) and the relatively small amount of rice (¾ cup) but it works!

Yes you do have to cook it for a long time, but at the end of it, you have a thick and rich and delicious custardy pudding.

It doesn’t taste like rice in the sense that you don’t taste individual grains of rice, the whole thing is really more like custard than anything else.

How To Make Vegan Rice Pudding

This is because you’re boiling milk – yes it’s coconut milk, but all milk acts the same way. And you know what happens when you boil milk, that stuff foams up like crazy.

You do need to still keep a close eye on the pot – I pulled up a chair and read my book while this was simmering away – but if your pot is big enough the chances of it boiling over are very small.

Stir it at regular intervals. Give it a stir at regular intervals. You’ll know it’s ready when it’s super thick and tastes like custard. From the moment it boils and you turn it down to simmer and cover the pot, it takes about another 50 minutes of simmering to reach the right texture and thickness.

This makes around 6 cups of rice pudding. So either enjoy it all right away if you have a big family or divide it into portions, cover, and keep them in the fridge and you have puddings for days!

It will keep in the fridge (covered) for up to 1 week. 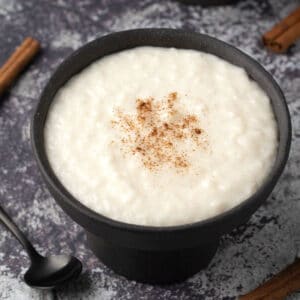