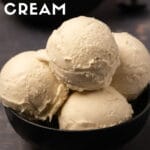 This vegan ice cream recipe is truly the best! It is creamy and smooth and has the perfect ice cream texture. You will definitely not miss the dairy in this delicious dessert!

I have been making vegan ice cream for years and I truly think this is the most divine recipe.

Our goal was to create a texture that is pretty much identical to regular dairy-based ice cream. And we’ve done it!

It’s everything you want an ice cream to be, perfectly textured and perfectly sweet, ultra creamy and smooth and melts in your mouth.

The secret? We use a mix of homemade cashew cream and coconut milk to create the neutral creamy base that very closely matches a dairy cream base in terms of flavor. And to that we add cacao butter and coconut oil which creates the perfect texture.

Serve it topped with vegan chocolate sauce or vegan caramel sauce or with add-ins like vegan cookie dough or vegan brownie pieces.

How To Make Vegan Ice Cream

Freeze the bowl. Don’t forget to freeze the bowl of your ice cream maker in advance (at least overnight). We just keep ours permanently stored in the freezer so it’s always ready to go when we want to make ice cream.

Homemade ice cream doesn’t last quite as long as store-bought ice cream. It tends to start forming ice crystals after about 2 weeks.

So it’s best to consume all your ice cream within the first 2 weeks after making it.

How To Make Vegan Ice Cream Without A Machine

It is possible to make vegan ice cream without a machine, and we have a couple of recipes that are designed around not needing to churn the ice cream at all, like our vegan cookies and cream ice cream or our peanut butter banana ice cream made in a food processor.

However, if you love making homemade ice cream recipes then getting an ice cream machine is very worthwhile. We have a Cuisinart and it is the bomb diggity. I love it! It churns almost any ice cream I make into a lovely soft serve consistency within about 25 minutes (which is fast).

But, of course if you don’t have one yet then this doesn’t help you.

What an ice cream machine does is incorporate air into the ice cream while it churns and freezes it. It also helps to keep the ice crystals really small so that it has a lovely smooth texture.

So the way to cheat this if you don’t have an ice cream maker is to beat the ice cream mixture in your stand mixer if you have one of those. Then place it into the freezer and before it’s frozen, bring it out a couple more times and beat it again. This will come closest to what you’ll get with an ice cream machine. 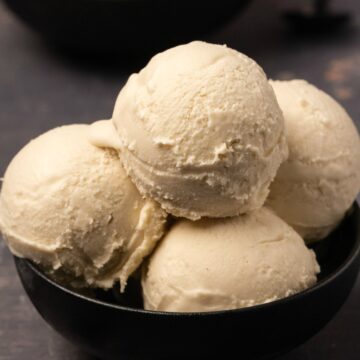 For the Ice Cream: