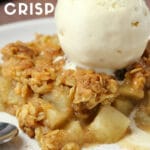 In fact Jaye is already saying this is going on the Christmas menu.

For everyone celebrating Thanksgiving on the other side of the world, this is another perfect dessert idea. Along with our vegan pumpkin pie and vegan apple cake of course. Or why not all three?

Some vegan pineapple upside down cake wouldn’t go amiss either!

How To Make Vegan Apple Crisp

Peel and chop up a bunch of apples so that you end up with 8 cups of peeled, cubed apple (about 2.2lb/1kg). My apples were really small so I had to use a lot of apples (like 13 of them!).

This is really the most time consuming part of the whole dessert making process. And I think you know that peeling and chopping apples is really easy, so I hope you’re getting the idea that this is a super easy dessert, because it is.

Then smooth down into a 9×13 baking dish (spray it with non-stick spray first).

Then you mix up your topping. You can use the same bowl as you used for your apples. See? Easy one-bowl recipe.

Add flour, rolled oats, brown sugar and cinnamon and mix together and then pour in some melted vegan butter and mix in.

Then all you have to do is spread the topping over the apples. Use your fingers for this, crumbling the topping between your fingers so that it lands in little clumps and crumbles of topping and spreads over the whole top of the dish.

This will be totally divine once baked.

And then you bake it for 50 minutes. The topping will be golden and crispy and the apples will be baked to perfection!

When you take it out of the oven it will be bubbling up the sides, this is perfect.

Granny Smith apples work great in this recipe. They have a lovely tart/sweet taste and are really firm so they hold up very well when baked and don’t just turn into total mush.

I like to cut the apples into cubes for this dessert because I find that also holds up best with baking.

I tried a version where I cut the apples into slices instead of cubes and they didn’t hold up as well, it was still totally delicious, but it was a little more mushy. I like being able to see some intact cubes of apple even once this apple crisp is baked and you get that with cubes.

You definitely want to serve this hot with a scoop of vegan ice cream! The ice cream you see here is our vegan vanilla ice cream recipe. The only change I made to that recipe was to omit the vanilla powder because I didn’t have any on hand, so I used vanilla extract only.

It is the perfect pairing for this apple crisp. If you don’t want the hassle of making ice cream from scratch then use any store-bought variety, but I think vanilla is going to be the best flavor pairing for this.

The apple crisp is served hot, the ice cream is cold, it gets all melty and it’s pretty much heaven in your mouth.

Alternatively you can serve it with vegan whipped cream or vegan custard. Also completely divine with this.

Yes my friends if you want to make this gluten-free you definitely can. A simple switch for a gluten-free all purpose flour blend works great.

Also make sure you use gluten-free rolled oats.

Keep leftovers covered in the fridge for up to 5 days. You can reheat a slice at a time in the microwave, top it with vegan whipped cream or vegan ice cream and you’re good to go. Alternatively you can reheat the whole dessert in the oven at 350°F for 15-20 minutes until heated through.

It is also freezer friendly for up to 3 months. Thaw overnight in the fridge and then reheat in the oven at 350°F for 15-20 minutes until warmed through. 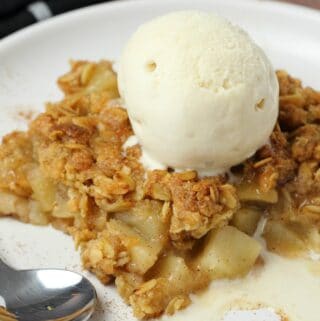 For the Apple Filling: