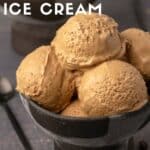 This vegan coffee ice cream is so good no one would ever guess it’s vegan. Rich and creamy and loaded with coffee flavor.

We were out for drinks with a friend and he told me that he has been making the BEST vegan ice creams lately.

So you know, I’m always willing to up my game when it comes to ice cream (or anything really!), so I asked him to tell me everything. He told me he bought a book called Artisan Ice Cream and has been loving the recipes. He said you use a mixture of homemade cashew milk and coconut milk to create the base and then add the flavorings from there.

This way you don’t get any of the ‘coconut’ flavor that you often do get when using only coconut cream/coconut milk for the base. The mix of cashew milk and coconut milk create a totally neutral creamy base that is ideal for vegan ice cream.

Well…let’s just say that after running a food blog for a few years now, I know that some of you don’t like the taste of coconut. So I was very intrigued, and bought the book myself, and picked up some good tricks that I also incorporated into our recipe for cashew ice cream.

I do recommend this book, but just a note that it’s not all vegan ice creams, there are 9 vegan ice cream recipes in the book and there are some vegan sorbets as well, but the majority of the recipes are non-vegan.

This vegan coffee ice cream recipe is adapted from their recipe book and I must say it has been getting rave responses from everyone who has tried it.

You start off by making homemade cashew milk. It’s important to use a homemade version because you’re going to make it so much thicker and creamier than what you’ll buy in the shops.

Basically you’re going to make more of a cashew cream than a milk or at least somewhere in the middle there!

Put the cashews on to soak. Put them into a bowl and then pour boiling water over them and let them soak for 1 hour. Then drain them and throw them into the blender along with some fresh water and blend until completely mixed in.

Add your freshly made cashew milk to a mixing bowl along with coconut milk and mix together.

Then add white granulated sugar to a pot along with a little water and heat, stirring continuously until the sugar is melted. You’ll know it’s melted when your wooden spoon is no longer making a scratchy sound at the bottom of your pot.

Put the whole bowl into the freezer for 15-20 minutes for the mixture to chill. Just be careful that you don’t forget it in there.

Transfer the ice cream to a loaf pan and smooth down with the back of a spoon and then cover with foil and place into the freezer to set. It will usually take at least 6 hours in the freezer to set, but it’s ideal if you just leave it there overnight.

Make your own homemade cashew milk as the recipe guides you to do. Don’t use a pre-made version, it will not be as good.

Full fat canned coconut milk. We need high fat ingredients to create a creamy ice cream. You can even use coconut cream if you like. Either one will work great.

Coconut sugar provides a wonderful depth of flavor but can be switched with light brown sugar in a pinch.

Have all your ingredients prepared and ready to go before you heat the sugar. You need the cacao butter chopped up into pieces so that it will melt in quickly. Cacao butter is kind of a magical ingredient in this ice cream and creates a wonderful consistency.

Ice cream machine. We use a Cuisinart Ice Cream Maker which works fantastically and usually only takes around 25 minutes to reach soft serve consistency.

Keep it stored in the freezer and ideally consume within 1 week. Yes, it’s ice cream, but it’s still best when fresh! 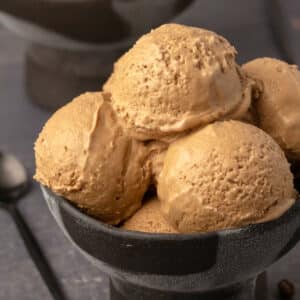