Rich, creamy and boozy vegan eggnog. This simple recipe uses cashew nuts instead of egg to create a deliciously thick creamy drink perfect for the holidays.

So this vegan eggnog doesn’t have any eggs in it. Of course, because it’s vegan.

Some people get a bit outraged by naming something with the original term and then just putting ‘vegan’ in front of it.

Like our vegan cheesecake. I am often told on facebook that it should be called a ‘cashew cake’. Um….no.

When you want to make a cheesecake without cheese then ‘vegan cheesecake’ is what you go looking for!

So this is a vegan eggnog, notwithstanding the fact that there is no egg.

I did go all out and make a full on boozy version. With bourbon no less.

If you’re not a fan of boozy things then you can leave it out and just have a delicious creamy holiday drink.

How To Make Vegan Eggnog

I chose a mix of coconut milk and coconut cream as the base ingredients along with cashews to thicken and, sort of, approximate the effect that egg would have in eggnog.

Add this to a blender jug along with cinnamon, nutmeg, vanilla and sugar.

Pour this out into a pot or saucepan.

Gently heat on the stove until it just reaches a simmer. Them remove from the heat.

Add in the bourbon and then give it a blend with your hand blender, pour it into a jug and put it into the fridge to let it chill completely.

Well, you can really serve it hot or cold, but we liked these served nice and cold.

It tastes like the most creamy dreamy liqueur. That you made yourself! You should definitely be proud.

Coconut milk/coconut cream. I used the full fat canned variety of coconut milk and coconut cream. If you wanted to switch for a different kind of plant milk you could do it, but it would be less creamy and rich. It would still be pretty delicious though, so that’s up to you.

Cashews. The cashews as mentioned are sort of my ‘egg replacer’ in the way that they thicken up the drink so nicely. If you’re not a fan of cashews you could use cornstarch as a thickener instead, I haven’t tested it this way, but it’s something you could try if you can’t do cashews.

Sugar. I used regular white granulated sugar, but you could switch for a different type of granulated sugar such as coconut sugar or even a liquid sweetener like maple syrup. It would change the color of the drink though.

Bourbon. We used Wild Turkey bourbon which was lovely in this. Use any bourbon you like, or switch it for rum!

Turmeric. A pinch of turmeric would help recreate the color of a classic eggnog. I didn’t use any when I made this eggnog but if you want the color to be a little more yellow, then this would work great. Just don’t use too much, as a little goes a long way when it comes to using turmeric for color.

Keep your eggnog stored in the fridge and enjoy it chilled. Consume it all within around 5 days.

It’s not recommended to freeze it. 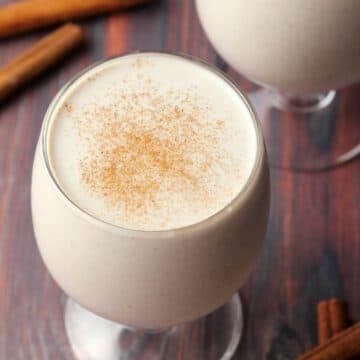