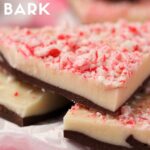 This vegan peppermint bark has a layer of dark chocolate topped with vegan white chocolate and crushed candy canes for a festive dessert.

This vegan peppermint bark is like a dream come true to me.

I have wanted to make it for years, but somehow was always missing one or the other ingredients (like vegan white chocolate, or candy canes).

Finding some good vegan white chocolate is often an issue, which is why I was so happy to find some vegan white baking chocolate on Amazon. I’ll confess I bought…um…a lot of this chocolate!

It’s a baking chocolate so it has some of that not sooo ideal taste that you sometimes get with baking chocolate. But when melted down and mixed with a bit of peppermint extract and coconut oil, and of course, on top of the dark chocolate and topped with candy canes, it’s still pretty good and the whole thing together works great.

When it comes to the dark chocolate, just use whatever good tasting vegan chocolate you can get hold of. Lindt has a great one called Swiss Classic Swiss Dark Chocolate that is vegan, but it’s not available worldwide. It melts down so well and is really good. But use any vegan chocolate (or chocolate chips) that you know melts down well and tastes great.

How To Make Vegan Peppermint Bark

As easy as this recipe is, it can also go really wrong.

If you make this crucial error, then they will not meld together when setting and will just split apart like two completely separate chocolates.

If the dark chocolate is set on the sides, but wet in the middle, then it’s too late, it will not meld together when setting and will just split apart.

So once you pour out the layer of vegan dark chocolate, smooth it down and then let it ‘just’ begin to set while you melt the white chocolate and then pour it on and smooth it out.

It’s okay at this point if there is a small amount of ‘swirl’. You can see in my pics, there is a little bit of swirl in a few of the pieces, it still works.

Keep it stored in the fridge where it will last for up to 2 weeks.

You can also freeze it for up to 3 months. Let it thaw in the fridge before enjoying. 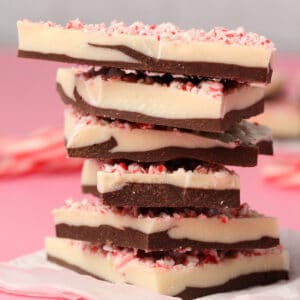 For the Dark Chocolate Layer:

For the White Chocolate Layer:

For the Crushed Candy Cane Topping: