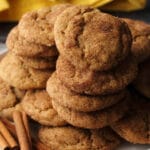 Soft and pillowy vegan snickerdoodles! These puffy and delicious cinnamon-sugary treats are so quick and easy you’ll want to whip them up every other day!

Vegan snickerdoodles! They are my new favorite thing.

So simple, so good and so quick and easy to make. They are the perfect holiday cookie but so good you’ll make them year-round.

Really, if you decide right now you’d like some vegan snickerdoodles and have all the ingredients on hand, you could have a freshly baked batch in front of you in 25 minutes from now! Very tempting isn’t it?

They are very much like sugar cookies, just dressed up in a lot of cinnamon sugary goodness!

The trick to some good vegan snickerdoodles is that they need to be soft. So you definitely don’t want to bake them too long.

So aim for around 20 cookies from your batch. If you get a couple more or a couple less that’s totally okay too.

How To Make Vegan Snickerdoodles

Making these cookies is so quick and easy that once you’ve got the hang of these you’ll never need to buy cookies from the store again.

You just cream together some vegan butter and sugar. Add in some vanilla and apple cider vinegar.

Then in a separate bowl mix flour, cream of tartar, baking soda, cinnamon and salt. Add to the butter and sugar mix and mix in together (by hand, don’t use the electric mixer for this part).

It will be quite dry and crumbly at this point so now you add in a touch of soy milk (or other non-dairy milk as you like) to get it to perfect dough.

Roll the dough into balls and then roll the balls in cinnamon and sugar.

Bake for 10 minutes at 375°F and you have perfect vegan snickerdoodles!

All purpose flour – make sure to measure this correctly either by weighing it on a food scale or by using the spoon and level method: spoon it into your measuring cup and then level off the top with a knife. No scooping allowed!

Apple cider vinegar – while this is an unusual(ish) ingredient in cookies, it really works in these cookies, trust me! It reacts with the baking soda, making these cookies so puffy, pillowy and soft.

Keep them stored in an airtight container at room temperature where they will stay fresh for up to 7 days.

They are also freezer friendly for up to 3 months. 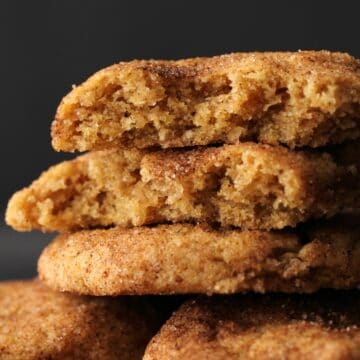