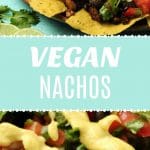 I’m probably going to say the words ‘fully loaded’ a lot in this post. To the point of being a bit irritating. Because, you guys, these vegan nachos are so totally fully loaded!

I mean, if you’re a bit short on time you can get away with serving some nachos with nothing more than some corn chips, salsa and vegan nacho cheese.

But when you really want to go all out and make an impression? Then you add vegan taco meat, a fabulously delicious spicy black bean mix and guacamole. And there are at least a few occasions when you absolutely, certainly, most definitely should go all out.

How To Make Vegan Nachos

So first up, don’t be intimidated by all the moving parts in this dish. It’s actually really easy.

This is the kind of recipe that will link to a few other recipes and might be a bit of a pain in that respect.

Never fear, either print out the different recipes so you have them all on hand, or be like me with multiple tabs open on your phone and flick through them like a pro.

Other than your basic corn tortilla chips (I just buy them, have not ventured into making those from scratch), you just want to make some vegan taco meat.

This is just a case of crumbling up tofu, and mixing with crushed walnuts and then tossing that all up with some sauce and baking the crumbles in the oven for 35 minutes.

Then when the vegan taco meat is ready, you just assemble it all.You can have everything done in 45 minutes to an hour.

And then you will proceed to wow yourself and everyone else too.

It sure is! The only thing you’ll have to be careful of is to make the vegan taco meat with gluten-free soy sauce.

How many serves? This looks large.

You are right this is a large plate of nachos. This can easily serve 8-10 people for a delicious appetizer.

What to do with leftovers? Well… you really do want to eat your nachos when they’re nice and hot and fresh and crispy and all that good stuff. The longer they sit, the more those corn chips are going to get soggy and it just won’t taste as good cold. So if you think this is going to be too much (like if you don’t have 8-10 people waiting around for appetizers) then just make up a smaller plate.

Even if you do have 8-10 people waiting on nachos, you might not use all the vegan nacho cheese. We used only half the batch of vegan nacho cheese on these nachos. But leftover nacho cheese can easily be kept in the fridge and used over the next few days. It’s divine served plain with corn chip or used as a sauce on top of vegan burgers (we’ve done it, and loved it!).

Leftover pico de gallo can be stored in the fridge for a few days, and leftover beans and vegan taco meat can also store perfectly well in the fridge.

So if you want to make up a smaller plate, then just make less guacamole (as that won’t store) and store the leftovers of the vegan nacho cheese, pico de gallo, beans and vegan taco meat and make up another plate of nachos the next day! Or make some tacos or vegan burritos with the leftovers. 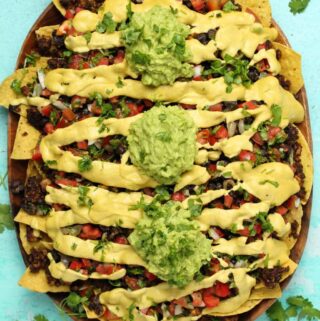 For the Vegan Taco Meat:

For the Black Bean Mix:

For the Vegan Nacho Cheese: