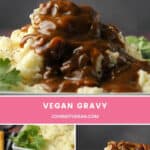 This vegan gravy is the best ever. It’s rich and flavorful, easy to make, hearty and satisfying and just perfect over mashed potatoes.

This vegan gravy has been making us very happy!

It’s super easy to make and absolutely divine poured on top of some vegan mashed potatoes! Add some vegan sausages and you have bangers and mash. Sooo good!

It’s a super simple recipe that is also ready in 30 minutes. And it’s so tasty that you are going to want to pour it over everything once you’ve tasted it.

It’s wonderfully rich and creamy and tastes just like gravy should. It has some lovely texture (from the onions in the gravy) and it’s hearty and really satisfying.

If you’re a fan of mushrooms though, then you should also try our vegan mushroom gravy. It’s every bit as good as this gravy, just with mushrooms!

How To Make Vegan Gravy

Why dark soy sauce? Dark soy sauce gives the gravy the really rich color here. You can use a light soy sauce if that’s what you have on hand, but the color will be much lighter as a result.

How To Serve This Gravy

Leftovers keep well in the fridge for 3-4 days and can be reheated on the stove or in the microwave. If it gets too thick while reheating, then thin it out with a little added water.

You can also freeze some if you like, let it cool completely before freezing and then freeze in a freezer-safe container. Let it thaw overnight in the fridge when you’re ready for it and then reheat as usual. 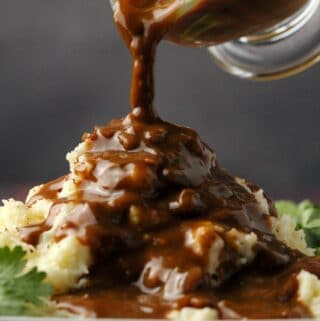