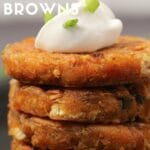 These vegan hash browns are perfectly browned and extra crispy and so easy to make. Perfect for breakfast or brunch.

What’s better than a stack of vegan hash browns in the morning? Not a whole lot!

And yes, I know hash browns are often vegan already, though sometimes they can be made with butter and eggs.

But it’s still worthwhile to make them from scratch because they just taste so darn good. The extra effort is entirely worth it.

How To Make Vegan Hash Browns

Shred the potato in a box grater. If you want to make this part really easy you can do it in the food processor. We tried it both ways and both ways worked great, but I preferred the version where we grated it in the box grater because the more finely shredded potato created a better texture.

Triple rinse. Once you’ve grated the potato then do the triple rinse. This is to get rid of the starchiness from the potatoes and helps them to crisp up nicely.

Add the shredded potato to a bowl and cover with cold water. Let them sit for a minute and you’ll see the water will go cloudy.

Add the shredded potato to a mixing bowl.

Divide the batter into 6 balls and use a cookie cutter to mould them into patty shapes. Alternatively you can roll them into balls and then press down with the bottom of a glass to form a patty shape.

Heat olive oil in a wide frying pan and add all the hash browns to the hot oil. Fry them for around 3-5 minutes per side, until beautifully golden and crispy.

Your hash browns are ready to serve!

This recipe makes 6 vegan hash browns. If you need to make more, feel free to double the recipe.

If you do it that way, then preheat the oven to 210°F (100°C) and place some parchment paper over a grill rack on a baking tray. Place the first batch of hash browns in the oven to stay warm while you fry up your second batch.

Keep leftovers stored in the fridge in a covered container for 3-4 days or in the freezer for up to 3 months. 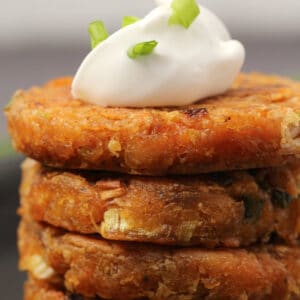 For the Hash Browns: