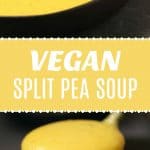 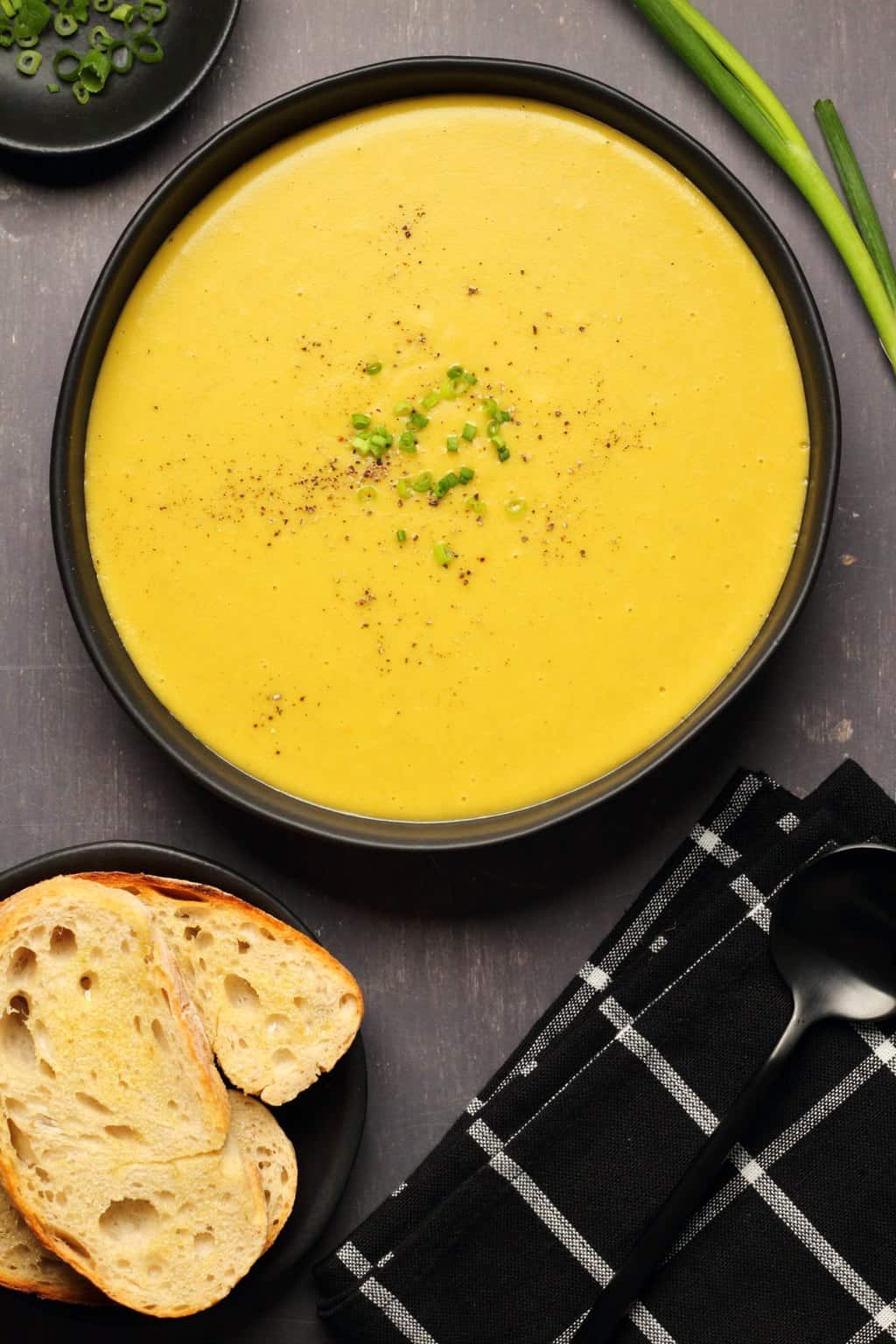 Are you surprised that this vegan split pea soup is yellow? Did you think it should be green?

I did! I kind of had the idea that I would have a bright green soup if I made any kind of soup with the word ‘pea’ in the title!

And basically – from what I could find out – there isn’t any major difference between yellow split peas and green split peas so you can use either/or and the soup you get will be yellow either way. 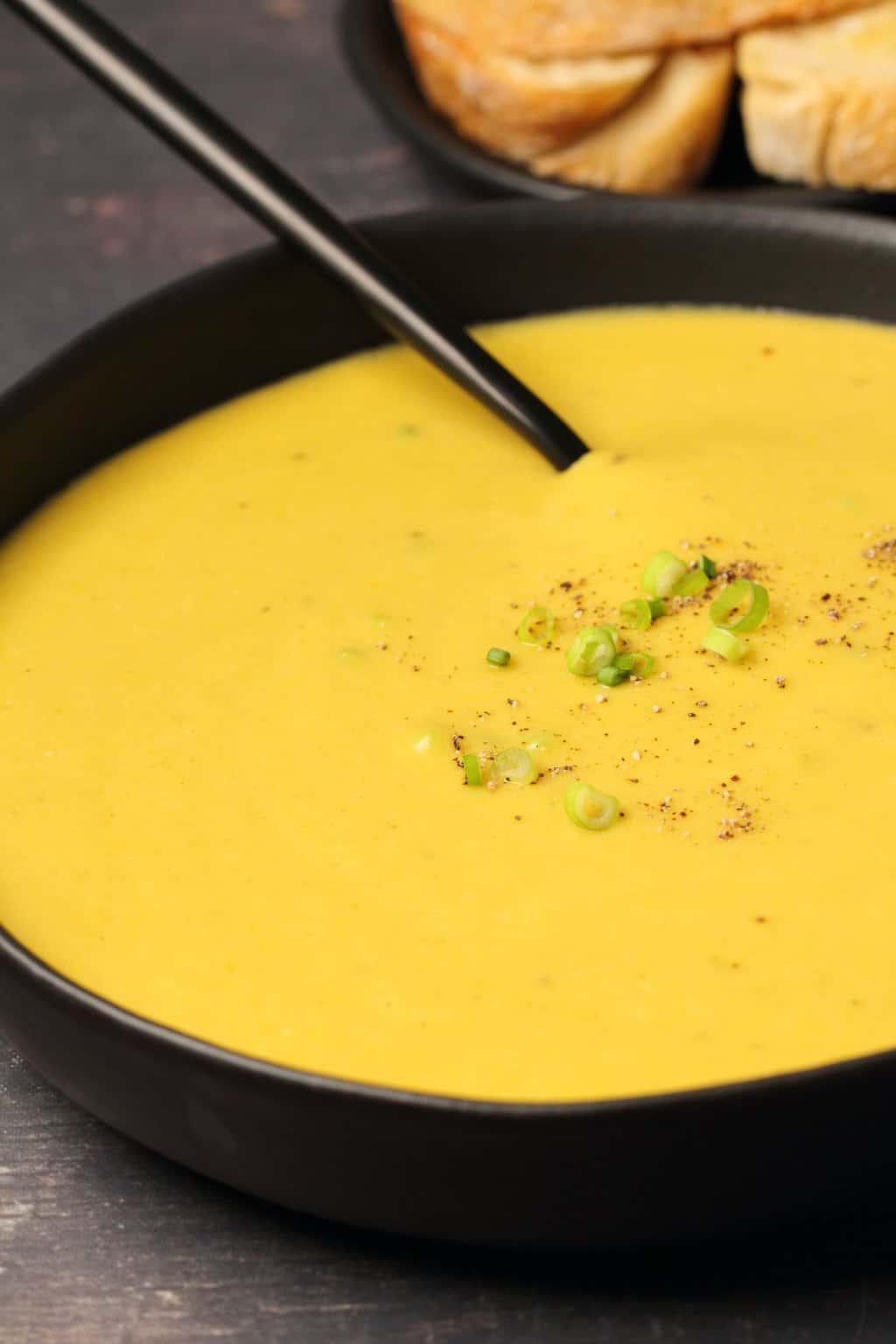 I had it in mind that it would be rather nice if this soup turned out green. After all, the yellow/orange colored soups are so common. I have multiple soup recipes on this blog already and so many of them fall into this category.

I mean even my vegan potato soup is orange (due to the carrots – but oh wow sooo good!). And you definitely can’t expect anything other than orange when you make a vegan butternut squash soup or a vegan carrot soup can you?

It wasn’t until I made a straight up vegan pea soup (not split pea soup, just pea soup) made from frozen peas that I got my green colored soup. And what a bright green color it is too. And I also made a vegan zucchini soup. Yay for the green soups!

But enough about that, let’s get back to the matter at hand which is this delicious vegan split pea soup. It’s in a league of its own. It has a distinct flavor.

Yes – it tastes like peas, but in the best possible way. 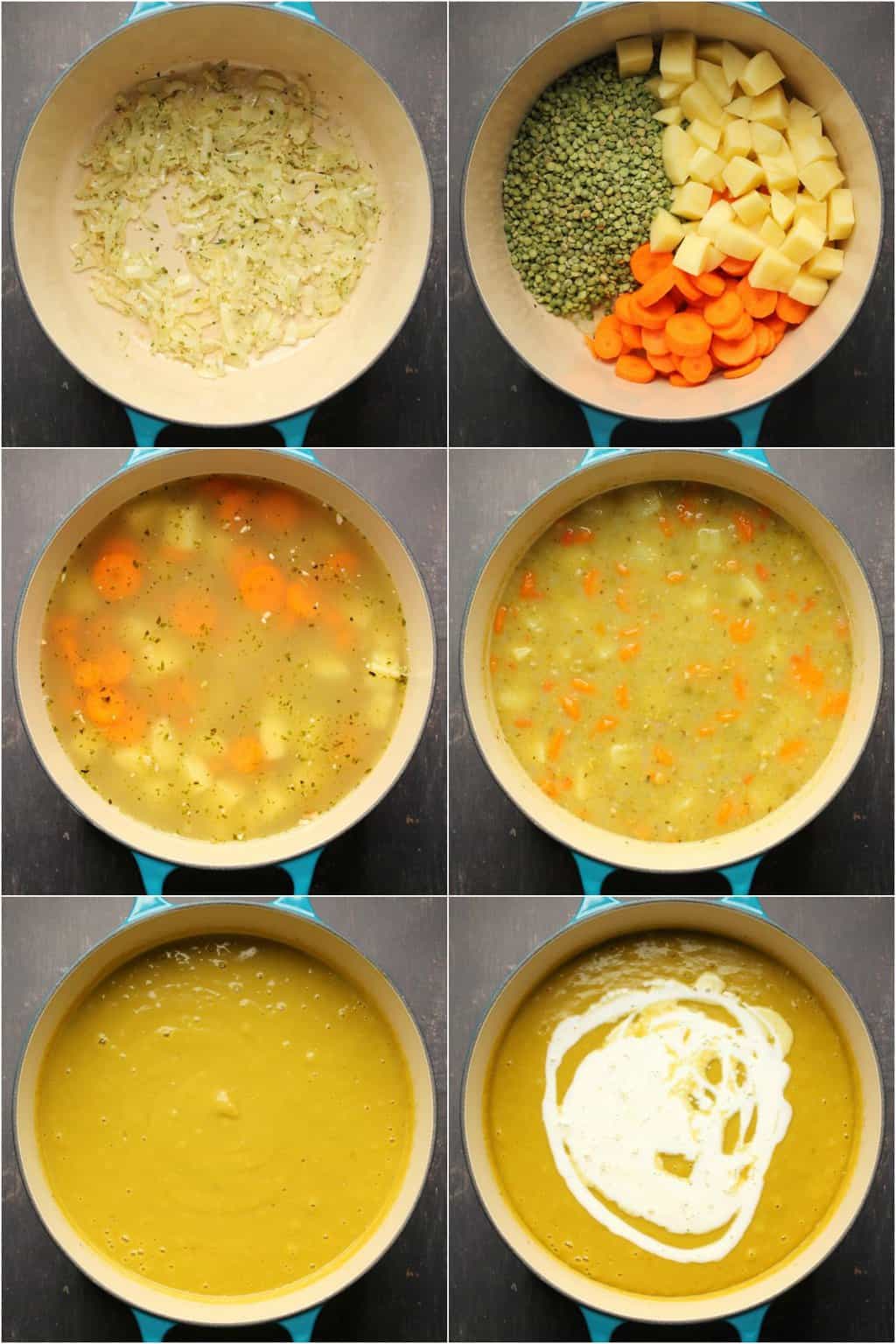 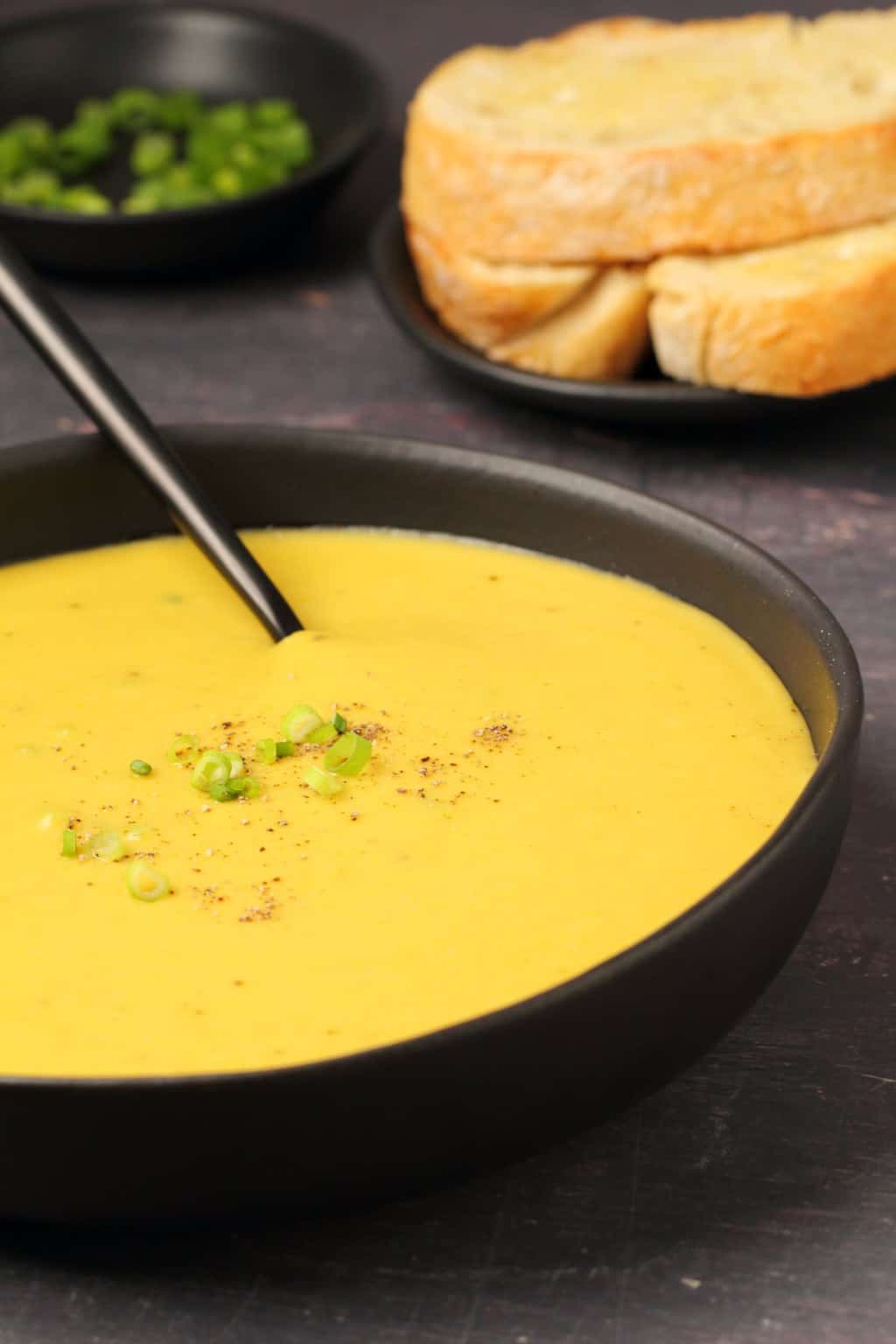 This soup is so filling you can easily have it as a main course. In fact I would recommend it. It’s a really thick, hearty and delicious soup.

We tend to think of soups as appetizers and of course this can be an appetizer, but I also think you might skip your main course. It’s just so filling.

Also, since it is so high in protein, it really is a fully balanced meal on its own.

This recipe makes a big pot of soup which is totally fine because it keeps really well in the fridge for a few (3-4) days and you can reheat it as you like. If you find it really too thick when reheating, then feel free to thin it out with a little more water or coconut milk. It is also freezer friendly if you want to freeze it. 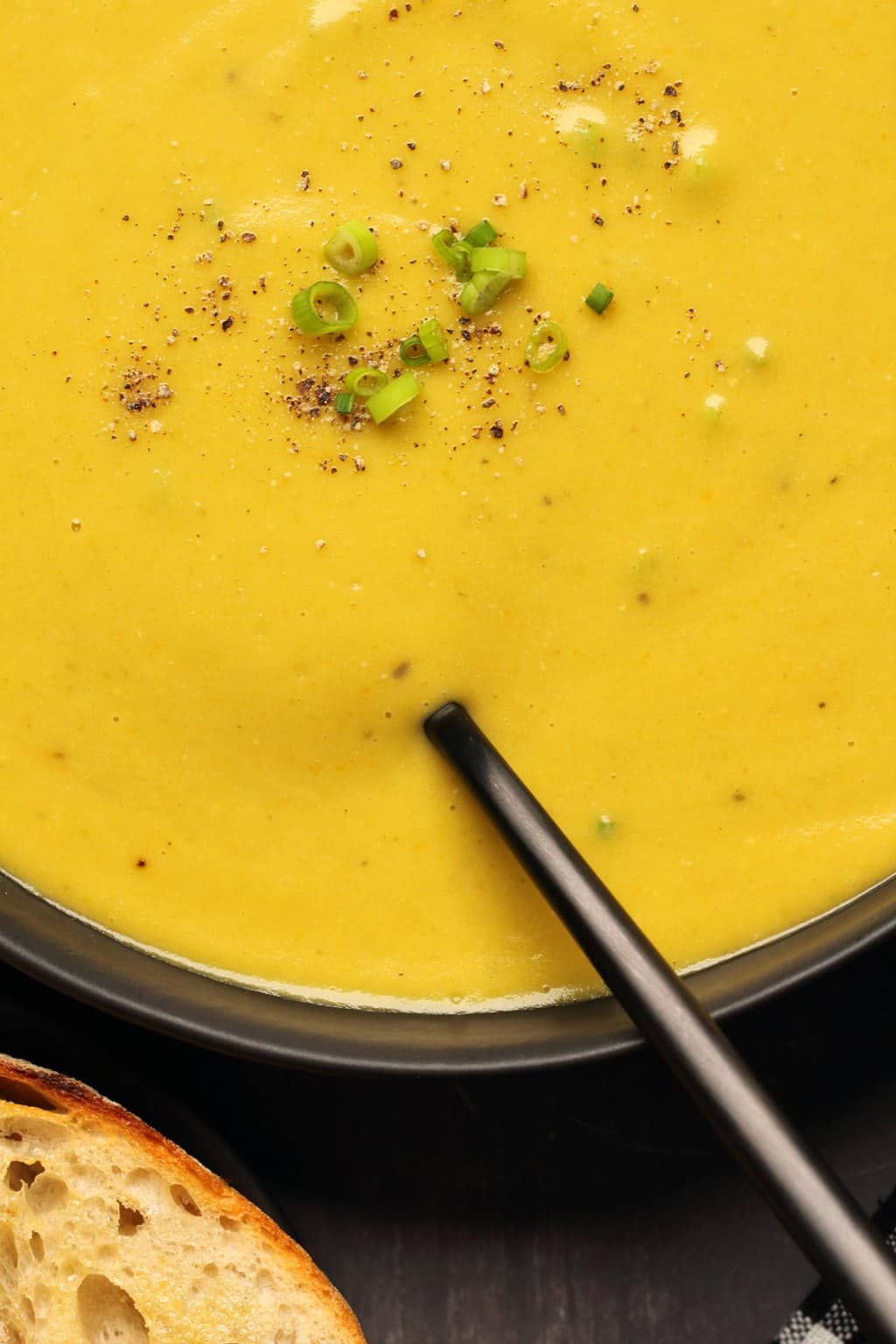 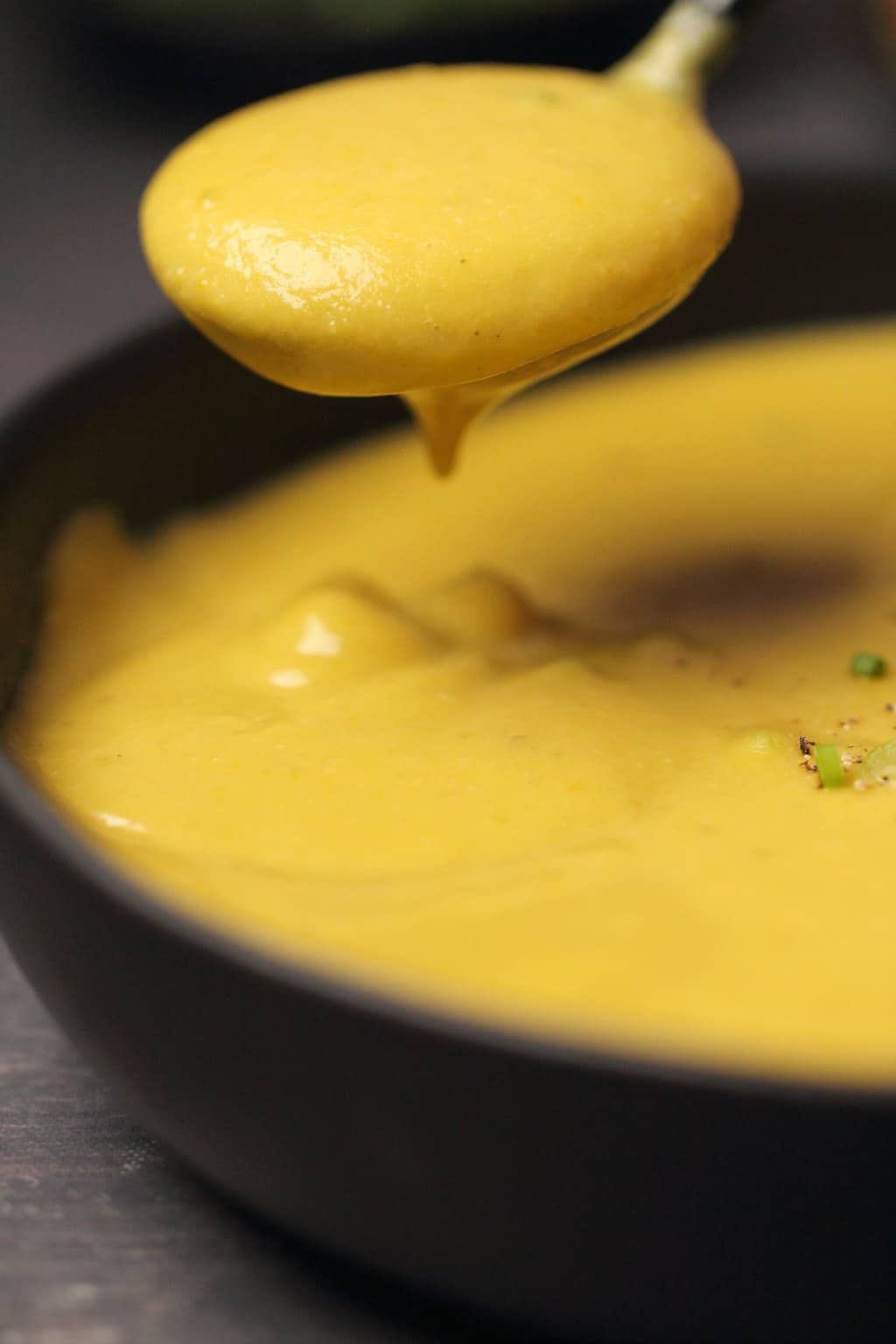 *You can use dried yellow split peas as well, it won’t make any difference. I have used either/or with this soup.

*This is a very filling soup, so it will serve at least 8 as an appetizer or 6 as a main course.

*This recipe was first published in March 2017 and has now been updated.

Loving It Vegan is a participant in the Amazon Services LLC Associates Program, an affiliate advertising program designed to provide a means for sites to earn advertising fees by advertising and linking to Amazon.com. This site may contain some of these links to Amazon.com. If you make a purchase through one of those links, Loving It Vegan will receive a small commission from the purchase at no additional cost to you.
Previous Post: « Vegan Meatballs
Next Post: Vegan Pepperoni »