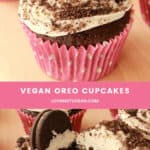 These vegan oreo cupcakes are moist and delicious with contrasts of texture between a crunchy oreo cookie base, rich chocolate cake and velvety frosting! 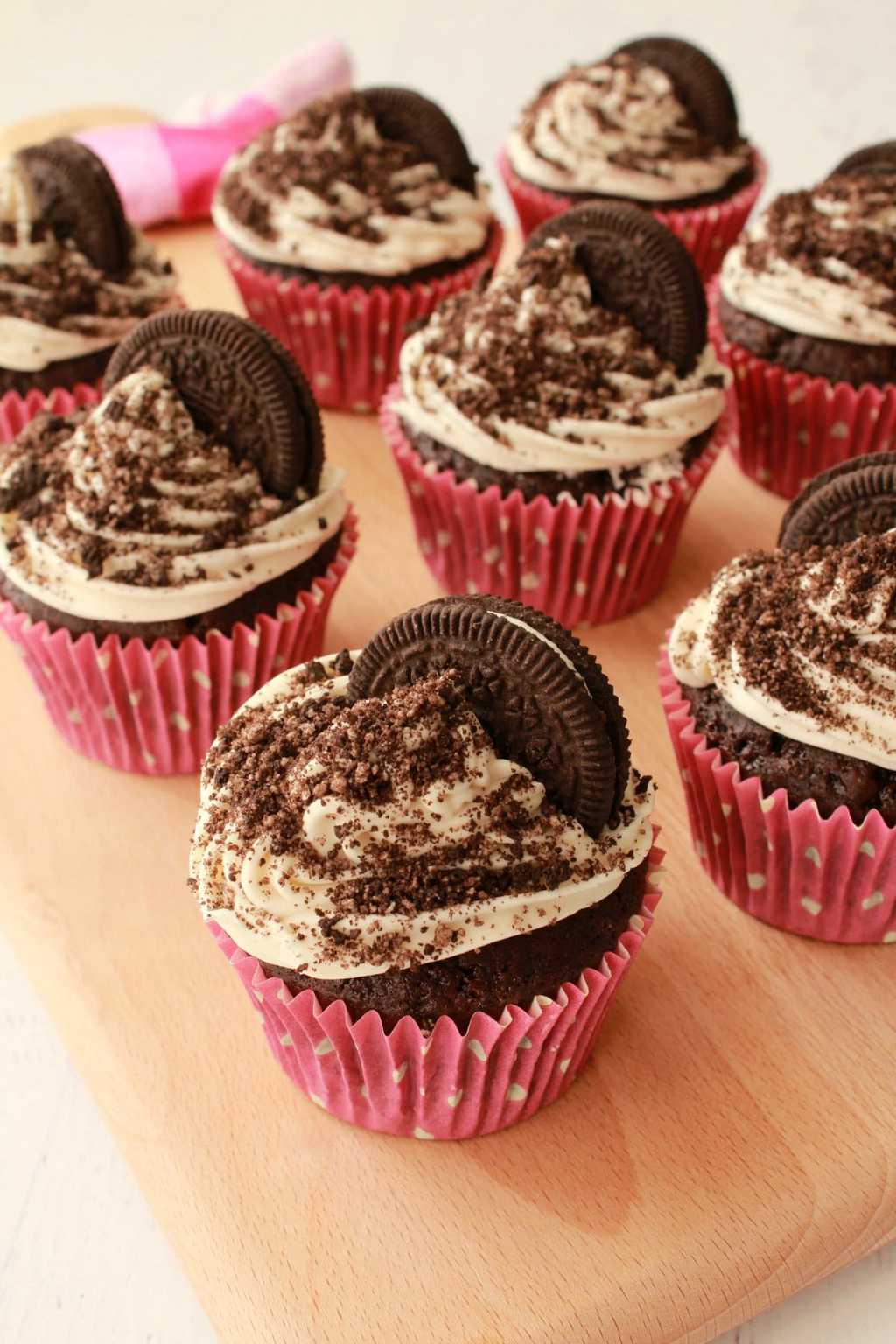 When I first started thinking about making some oreo cupcakes, I wasn’t sure how exactly one would do this.

Would you put oreo pieces into your cake batter? Would it just be a case of propping an oreo on top of a cupcake that would mean you could call it an oreo cupcake? Or mixing oreo crumbs into the frosting?

And so I went browsing recipes and pictures of oreo cupcakes and saw that yes, all of these, or one of these or some of these.

I didn’t want to put oreo pieces into the actual cake batter because I thought that might be a bit wasted, OR, worse, it might affect the texture of the cupcake itself, which you just don’t want.

So I decided to bake the entire oreo cookie into the base of the cupcake, frost them with a simple vanilla frosting and top them with oreo crumbles and prop an oreo cookie half on top. And this was just perfect.

I did try mixing oreo crumbles into the frosting directly, but I didn’t like how it came out. It turned the frosting a weird sort of gray color. It tasted good but the look was bad. Whereas oreo crumbles sprinkled on top of a vanilla frosting was super pretty.

The oreo cookie at the base of the cupcake bakes perfectly into the cupcake, so you have a deliciously crunchy cookie base, with moist and spongey cake in the middle and smooth, velvety frosting on top.

And if you worried that baking a whole cookie into the base of the cupcake might make the cookie seem a little overbaked (after all – it’s already cooked when it goes in), then never fear. The oreo cookie withstands the extra baking wonderfully, and comes out pretty much the same way as it goes in, except for the fact that it is now part and parcel of the cupcake.

An extra half oreo cookie propped on top at a jaunty angle (or just straight up) gives these gorgeous cupcakes some flair.

Check our our vegan oreo cake too if you love oreos. 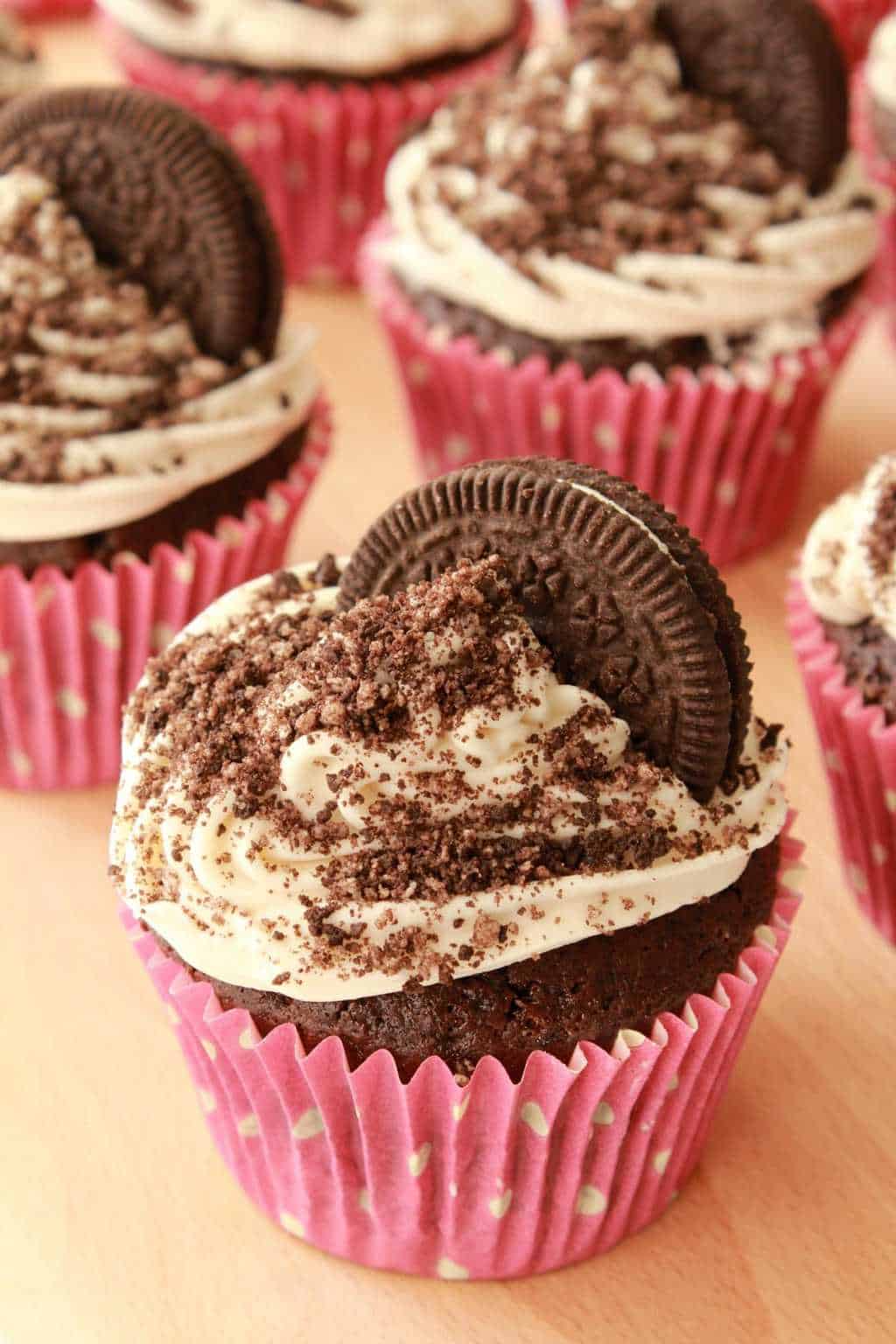 How To Make Vegan Oreo Cupcakes

Full measurements and instructions can be found in the recipe card at the bottom of the post, this is just a summary of the process. 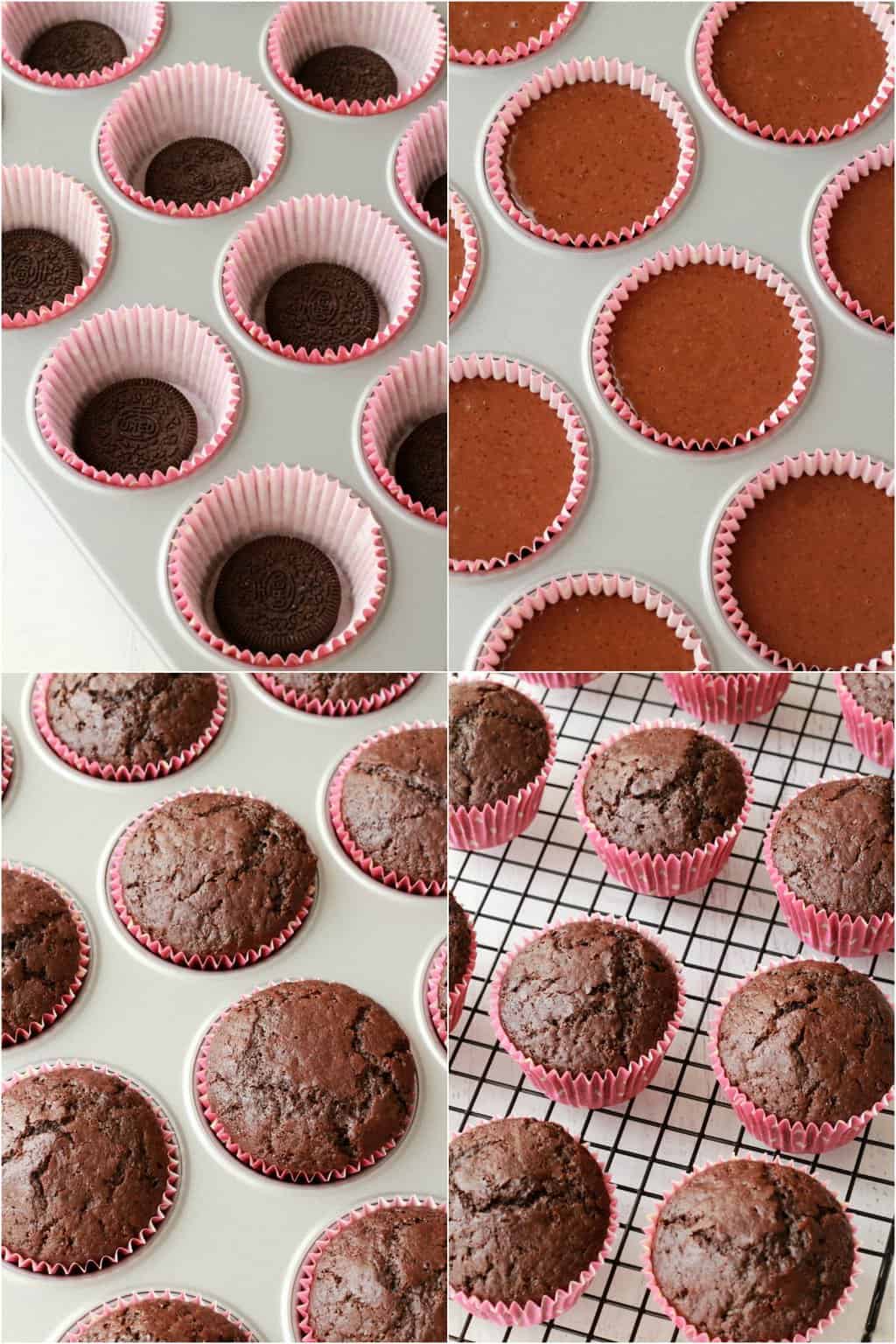 Flax Egg: It’s super easy to make a flax egg, you just need ground flaxseed meal and water. If you struggle to get the flaxseeds already ground, then you can do it yourself by adding whole flax seeds to your blender and pulse blending them. We have a tutorial on making a flax egg here: how to make a flax egg.

Flax Egg Alternatives: If you need an alternative option to a flax egg then 3 Tbsp of applesauce works great as a swap.

Baking Soda/Vinegar Combination: This recipe uses a combination of baking soda and vinegar which provides the wonderful rise of these cupcakes. So both of these ingredients are crucial. Don’t replace the baking soda with baking powder as it won’t work the same.

Don’t over-mix your batter: This is very important in vegan baking, because over-mixing your batter can affect the texture and/or rise of your cakes. So just mix it until mixed and then stop mixing.

Bake right away: Another important factor in vegan baking is to bake your cakes right away, don’t let the batter sit around for too long as this can also affect the rise of your cakes. 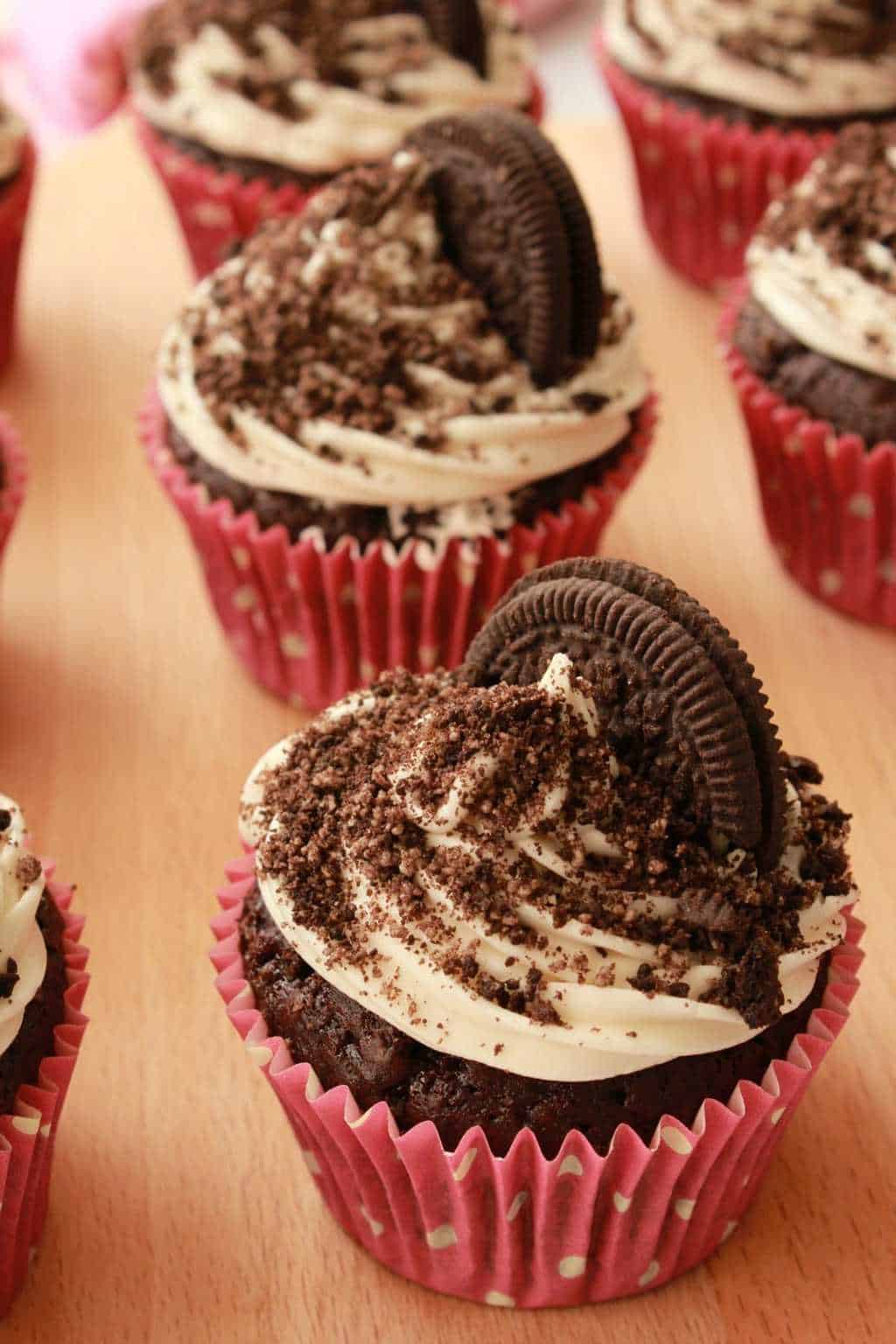 Keep your cupcakes covered in the fridge for 3-4 days for the best taste and texture results. The texture of the oreo cookies can start to get a little iffy beyond this point and lose their crunch. Usually cupcakes would last longer but it’s the oreos themselves that cause a slightly shorter shelf life in this case.

These cupcakes are not ideal for the freezer, again because of the oreos themselves. In the freezing and thawing process, the oreo will lose its crunch. It may not be a deal breaker but just so you know! 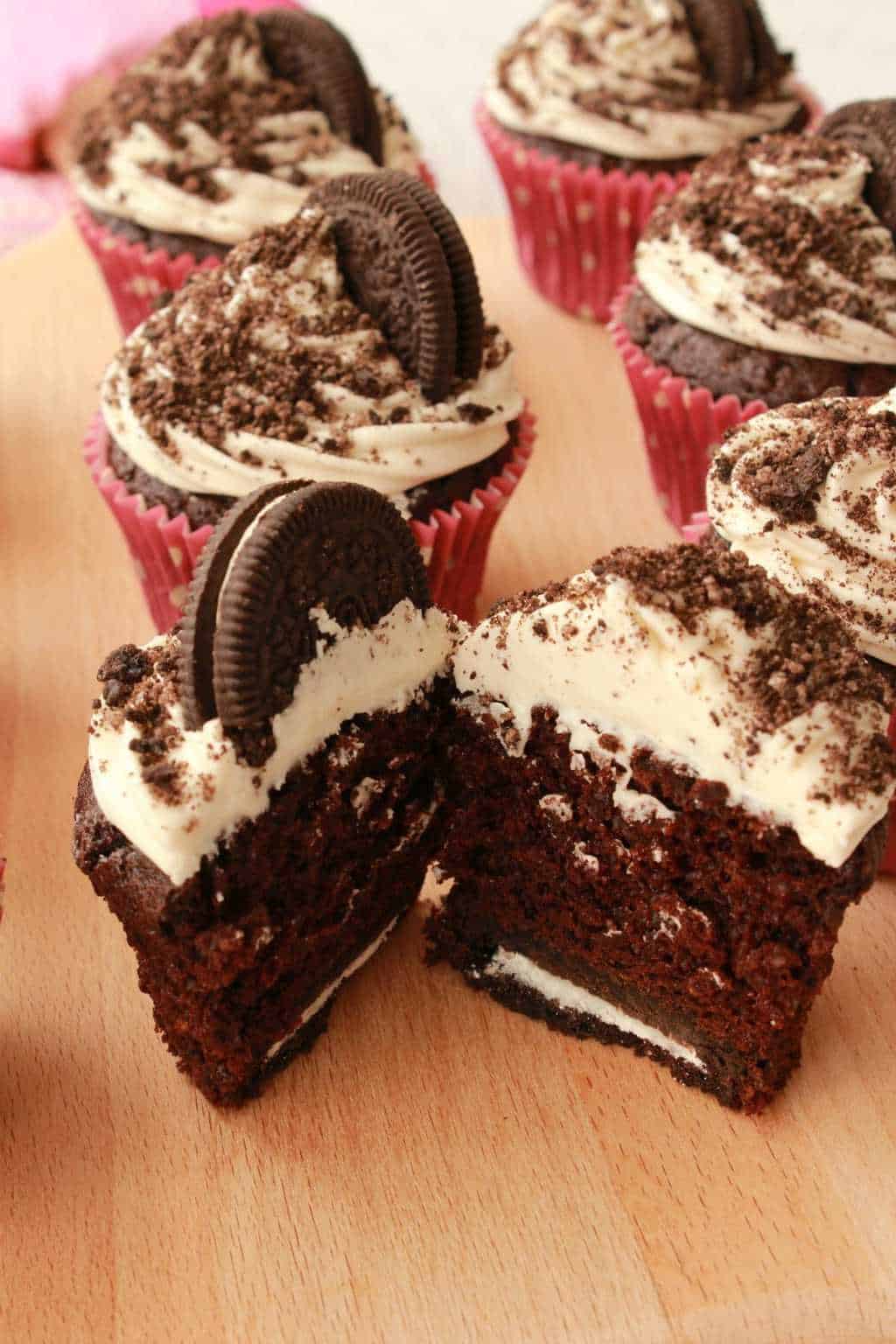 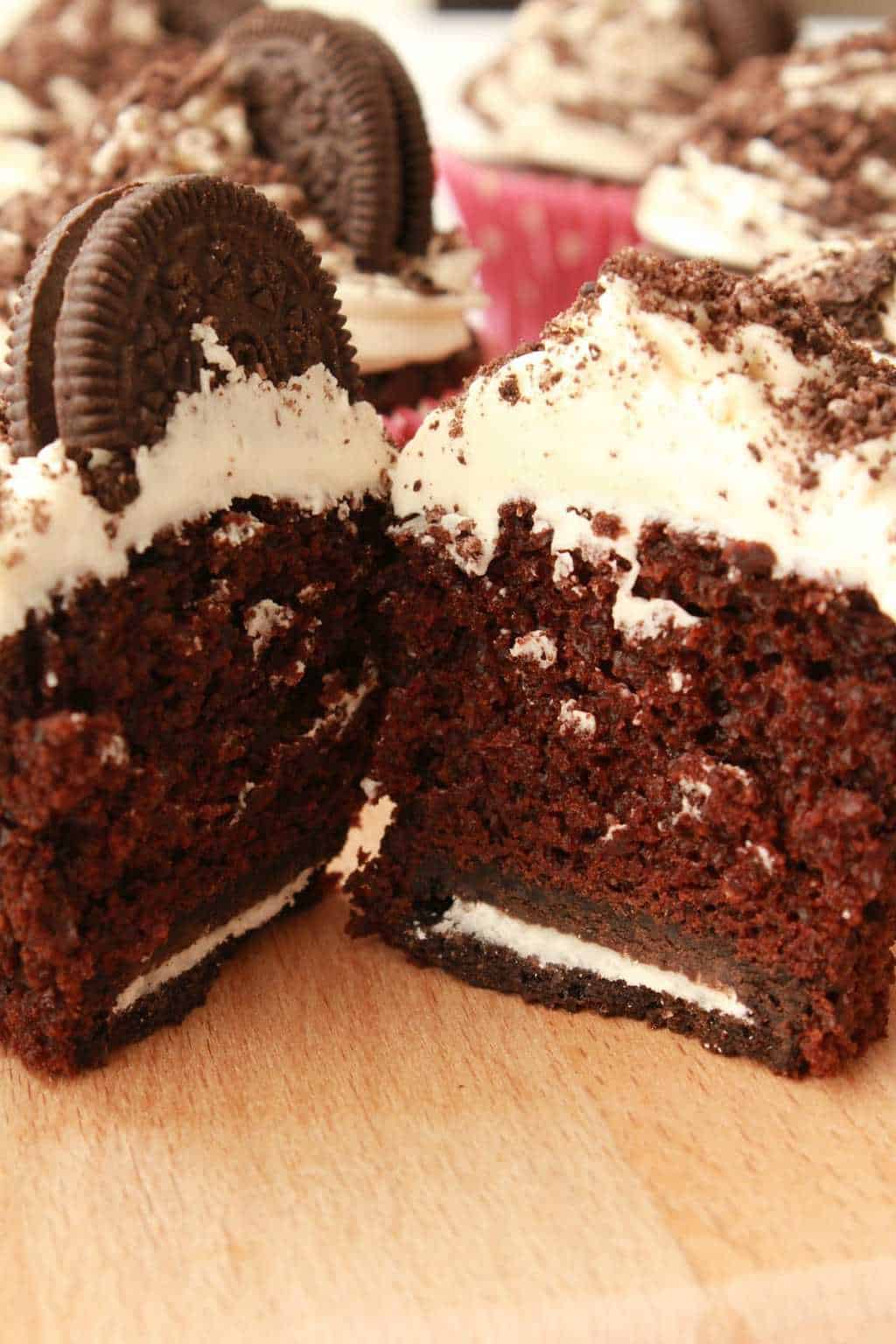 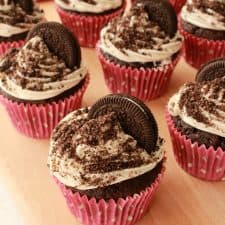 For the Oreo Cupcakes: