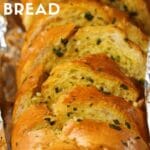 This rich and fabulously garlicky vegan garlic bread is ready in less than 30 minutes and makes the perfect shareable side dish.

Garlic bread is the best isn’t it? I mean is there anyone who doesn’t like garlic bread? If so, I’ve never met them.

It’s just a pity when you realize that a lot of restaurant garlic bread is not vegan! What to do? Make it yourself that’s what.

And when homemade vegan garlic bread is this easy and this delicious, you won’t mind a bit.

How To Make Vegan Garlic Bread

This garlic bread is super rich, and I won’t apologize for it. Hahaha, it’s restaurant-style. We are not skimping on the (vegan) butter nor on that delicious crushed garlic.

Add in some finely chopped basil and chives, a bit of salt and you have total perfection.

Once you’ve tried this vegan garlic bread, of course you should adjust it to your tastes. Want more salt? Go for it. Want to double the garlic? Do it.

But when you look at the amount of vegan butter and think ‘oh my that’s too much’. Well, it really isn’t.

Sure, this is rich, I can’t argue that point. But garlic bread is supposed to be buttered on both sides of the bread and it’s supposed to be rich. So really, it’s only just enough butter if you think of it that way.

And then, usually, garlic bread is to share. So it’s okay if it’s rich. You don’t have all that many slices. Or maybe you do, no judgment here.

What Bread Is Best For Vegan Garlic Bread?

The best bread to use is a baguette. You get different kinds of baguettes, some are softer and some have a crispier crust. Either one is going to work great here, but just bear in mind that if you want some crunchy crust to your garlic bread that you should use a baguette that is nice and crispy on the outside to start with.

You bake the garlic bread in foil so if it’s a softer baguette to start off with, it’s not going to become crispy in the oven, it will end the way it started (in terms of crispiness).

So you need it to start off crispy if you want it to end off crispy.

In terms of size, we used a baguette that was 2 feet long (24″). You cut that in half and make two loaves of garlic bread from it.

So that’s the size you’re going for here or pretty close. If it’s a bit bigger or smaller, that’s fine, but don’t get one that is much smaller, because the recipe proportions won’t work out.

This garlic bread is a perfect accompaniment to some delicious vegan soup, like our vegan tomato soup, vegan tomato basil soup or vegan cream of mushroom soup!

It would also be great alongside some vegan chili, not to mention vegan lasagna or vegan bolognese.

If you have leftovers, wrap them back up in the foil and keep them stored in the fridge. Reheat in the oven the next day.

You can also reheat it in the microwave (just remember to take it out of the foil before you do). 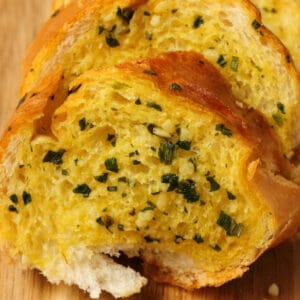 *Makes around 30 slices of garlic bread, so can serve around 6 people.