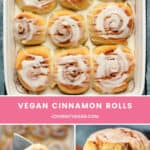 These vegan cinnamon rolls are hands down the best you’ll ever taste. Soft and puffy and packed with cinnamon sugar deliciousness. Simple recipe with spectacular results.

I made vegan cinnamon rolls!

And I have never been more proud.

Hahaha, seriously though, I thought it would be quite a big deal to make cinnamon rolls from scratch, but really it’s so easy.

But I have to warn you, it’s not quick. You have to wait for the dough to rise two separate times. So there is a full two hours of waiting around. It’s not a fast recipe.

Super easy, but not fast.

You won’t mind though, when you have one of these warm from the oven with icing drizzled all over it, you’ll be smiling all over your face.

How To Make Vegan Cinnamon Rolls

Top Tip: Ideally your dough should rise in a warm place. So if ‘room temperature’ is on the warm side you’re good. I had to move my bowl out of the way of the air conditioning! Just keep that in mind, if the room is very cold, ideally you want to put it somewhere warmer to rise.

Roll Out The Dough:

Cut out the rolls:

Top Tip: It’s best to use a plain unwaxed unscented dental floss for this. And after making these cinnamon rolls this is now an essential item in my baking cupboard. You just slide the dental floss under the roll of dough, cross it over the top and then pull.

Can I make these gluten-free?

Hmmm, I have no idea. I haven’t tried these as gluten-free and gluten-free flours do behave quite differently when making a dough. You could try it with a gluten-free all purpose blend but I don’t know exactly what the results will be.

Can you make these ahead?

You can make the recipe up until the point that you cut them into rolls and place them into your baking dish. But then instead of letting them rise in the dish, cover the dish with plastic wrap and refrigerate. The next day, bring them out and let them rise and come to room temperature (about 60 minutes) before baking.

How do you store them?

Can you freeze them?

Yes you can. Freeze the baked rolls and then let them thaw in the fridge and then bring them to room temperature on the countertop or warm them up before enjoying.

If it’s more dessert for breakfast that you’re after then our vegan apple muffins or vegan crepes will be happy to oblige.

Our vegan snickerdoodles are another recipe you won’t want to miss as is our vegan bread pudding. 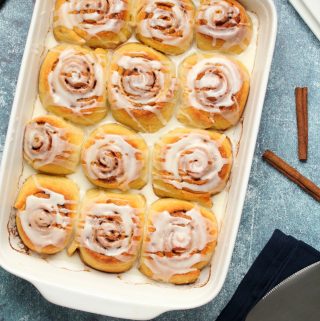