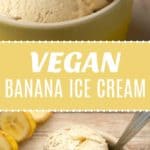 This vegan banana ice cream is made with roasted bananas for a really decadent, ultra creamy ice cream that even non-vegans will totally love! 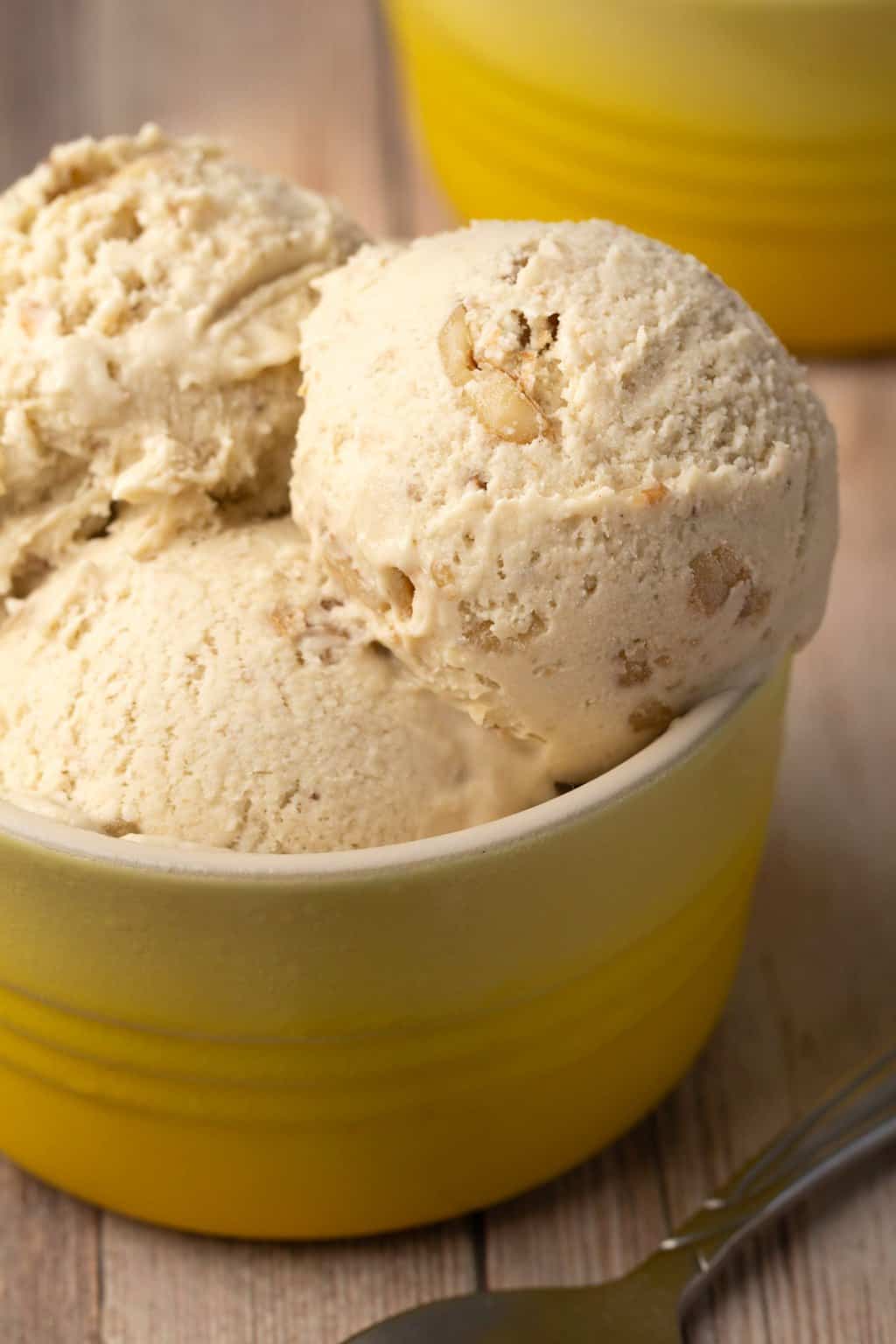 So you know that vegan banana ice cream that is made with frozen bananas in a food processor and is so simple and straightforward and only 1, or maybe 2, ingredients?

This is a roasted banana ice cream that will blow your socks off. It’s more complicated for sure, but worth it!

If you want the super simple frozen bananas in a food processor version then check out our 2-ingredient peanut butter banana ice cream recipe.

This recipe was inspired by the book Artisan Ice Cream that I’ve been banging on about for a while now. It’s not a vegan book but does have a few vegan recipes. I love the method they use and adapted this recipe along with our vegan coffee ice cream recipe from the book. 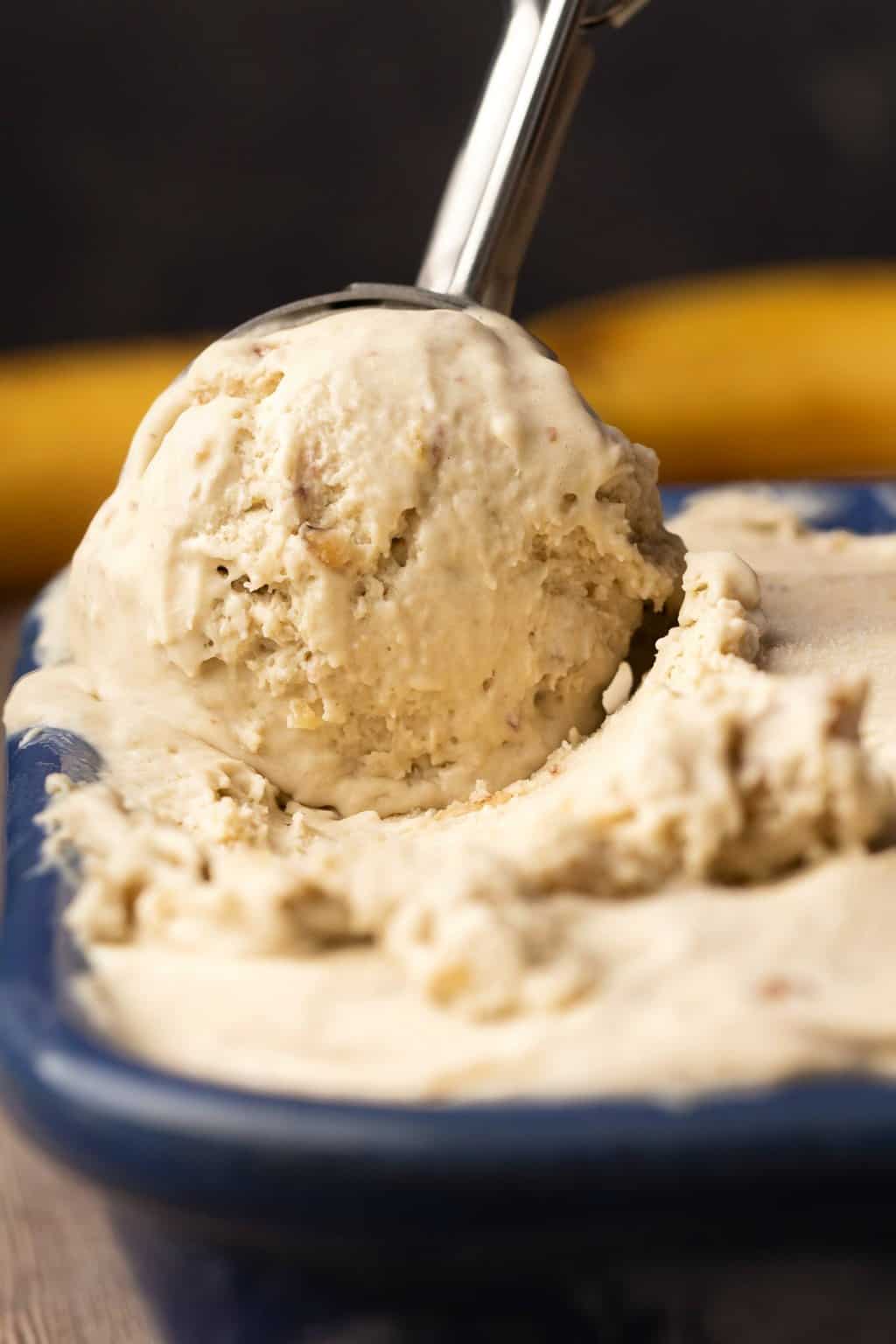 But you also use homemade cashew milk in this recipe. So the first thing to do is really put on some cashews to soak.

Put the cashews in a bowl and pour over boiling water from the kettle and leave that to soak for one hour.

Then you can get going on your roasted bananas.

Peel and slice 4 medium bananas and place the slices into a mixing bowl. Add in some melted vegan butter, brown sugar and salt and toss the banana slices until well covered.

Spread out onto a parchment lined baking tray and bake in the oven at 400°F for around 40 minutes until browned and caramelized.

You’ll see the edges are burnt. Don’t worry about that, that’s just the excess liquid that has baked off and burned around the sides. The actual banana slices themselves are browned and caramelized to perfection and not burned at all, and when gently lifted off the parchment paper and placed into a bowl, they are totally perfect and ready for use in your ice cream. 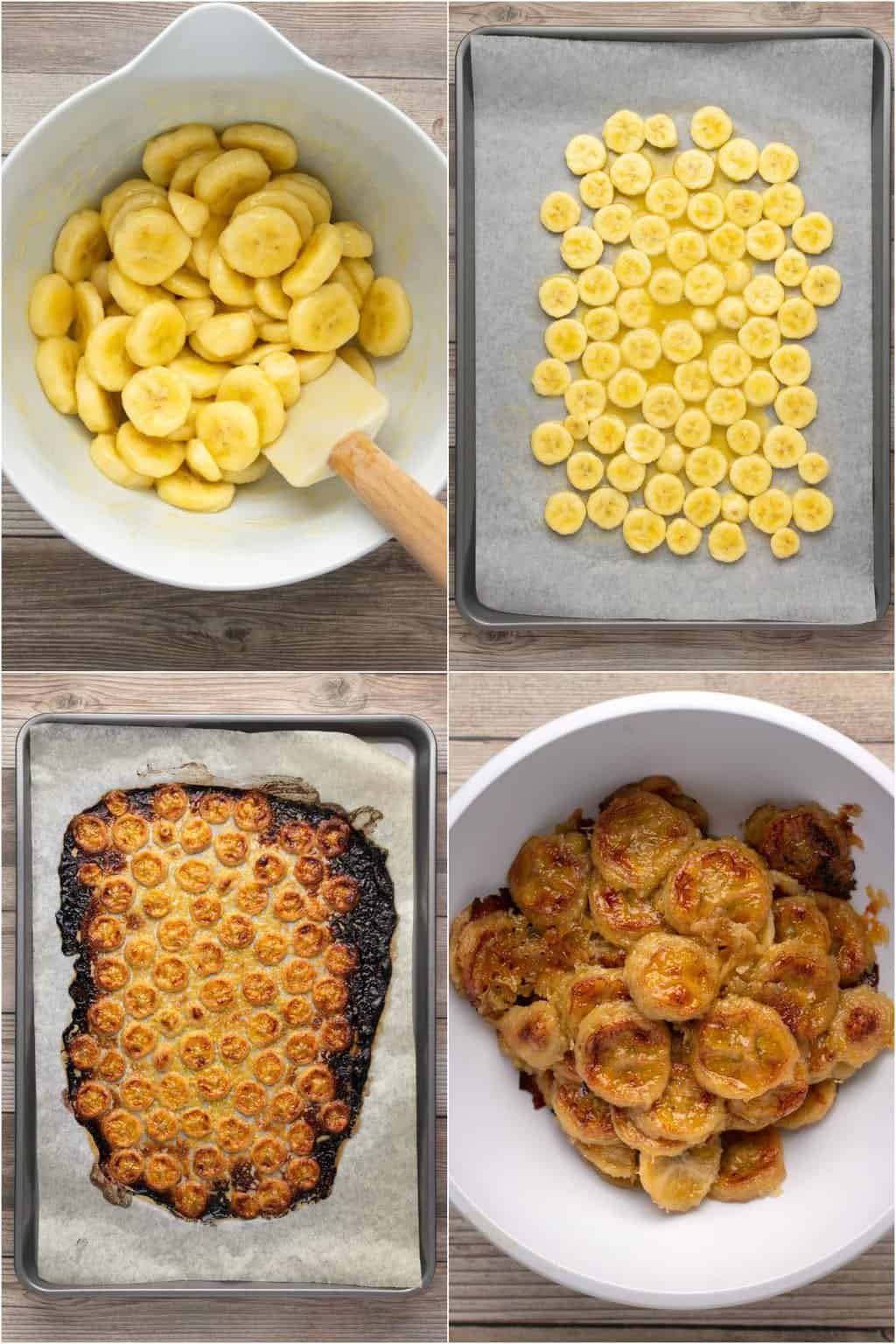 By the time your bananas are perfectly roasted, your cashews will be soaked and ready to blend.

Blend them up with some water into a thick and creamy cashew milk (it’s more like a cashew cream) and now you’re ready to make your ice cream.

Add the cashew milk along with some coconut milk to a mixing bowl and set aside.

Add some white sugar and water to a saucepan and let the sugar melt while stirring constantly. You’ll know your sugar is melted when your wooden spoon stops making a scratching noise at the bottom of the pot.

Add in some chopped cacao butter, coconut oil and salt and whisk until melted in.

Then pour this mix out into the bowl with the cashew milk and coconut milk mix. Add in some vanilla extract and the entire batch of roasted banana.

Blend in with an immersion blender. If you don’t have an immersion blender then transfer to a regular blender and blend until smooth. Then return to the mixing bowl and place the whole bowl in the freezer for around 15-20 minutes so that the mix becomes chilled. If it’s started to harden along the sides, then just stir it again so it’s all well mixed.

Churn it in your ice cream machine according to manufacturers instructions. We have a Cuisinart and it took around 30 minutes to get this to perfect soft serve consistency. In the last minute of churning, throw in some chopped walnuts.

Transfer to a loaf pan and smooth down with the back of a spoon. Cover and place into the freezer until completely set. 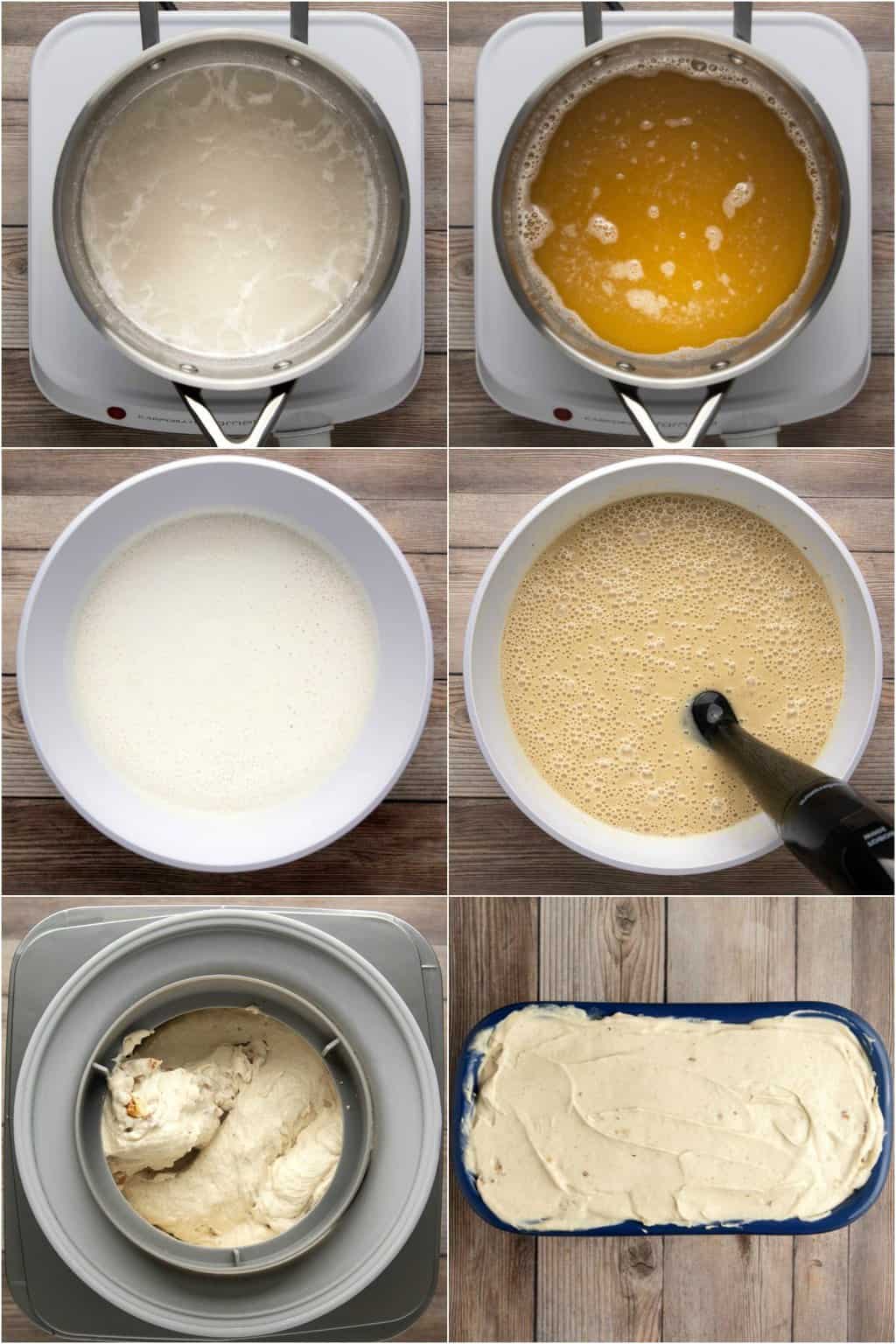 The mix of the two milks create a neutral base so that you don’t taste coconut. Since a lot of people don’t like the taste of coconut this is really a plus!

The roasted banana really gives an intensified banana flavor so you don’t need to add any banana extract or anything like that, you have all the flavor you need.

Chopped walnuts are really the cherry on top of this ice cream, they are the perfect flavor complement to the roasted banana flavor and the perfect texture contrast to the creamy and smooth ice cream.

Have everything ready to go before you start melting the sugar. So your milks must be ready in a mixing bowl, your roasted bananas ready to be added in, the cacao butter must be chopped (so it melts in easily) and the coconut oil measured and ready to be added in.

Once the sugar is melted, everything moves pretty fast, so if all your ingredients are ready to go, you’ll have a very smooth experience.

Can you make it without an ice cream maker?

This ice cream mix is so tasty that if all you did was blend it and freeze it, it would still be super tasty!

But an ice cream machine is great to have because it incorporates air into the ice cream as it churns it, so while it’s freezing it, it’s also fluffing it up, creating that light and fluffy ice cream texture. It also helps to keep the ice crystals really small, so that you have a really smooth texture.

So if you’re going to make ice creams regularly then getting an ice cream maker would be a good investment.

However, you can ‘cheat’ it a bit. If you have an electric mixer, you can beat the ice cream mixture and then place it into the freezer and then while it’s freezing (but before it’s frozen) you can bring it out a few more times and beat it again. This will most closely approximate what you would get using an ice cream machine. 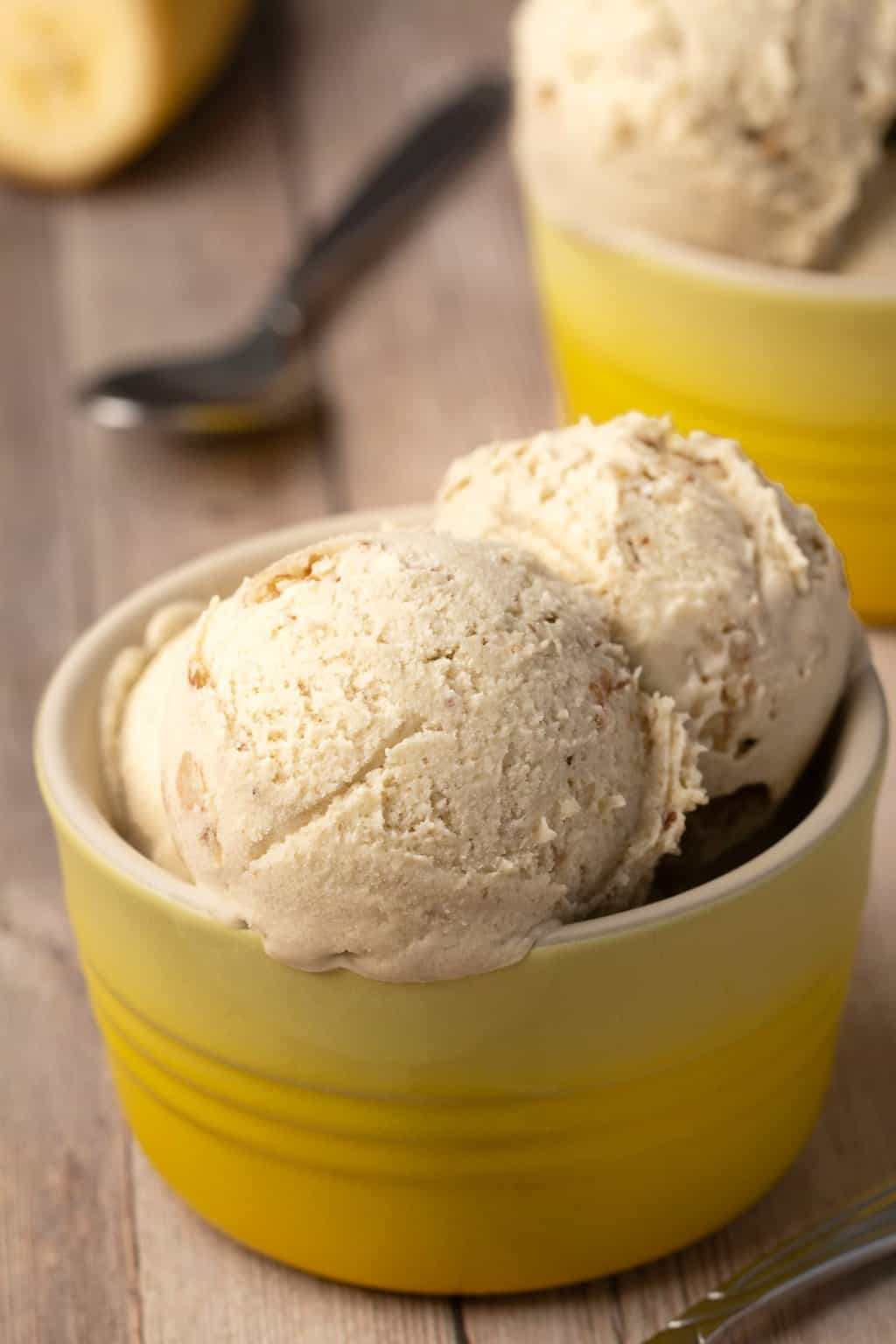 You will love this vegan banana ice cream! It is:

Keep it stored in the freezer and consume ideally within 7 days for the best flavor and texture results. 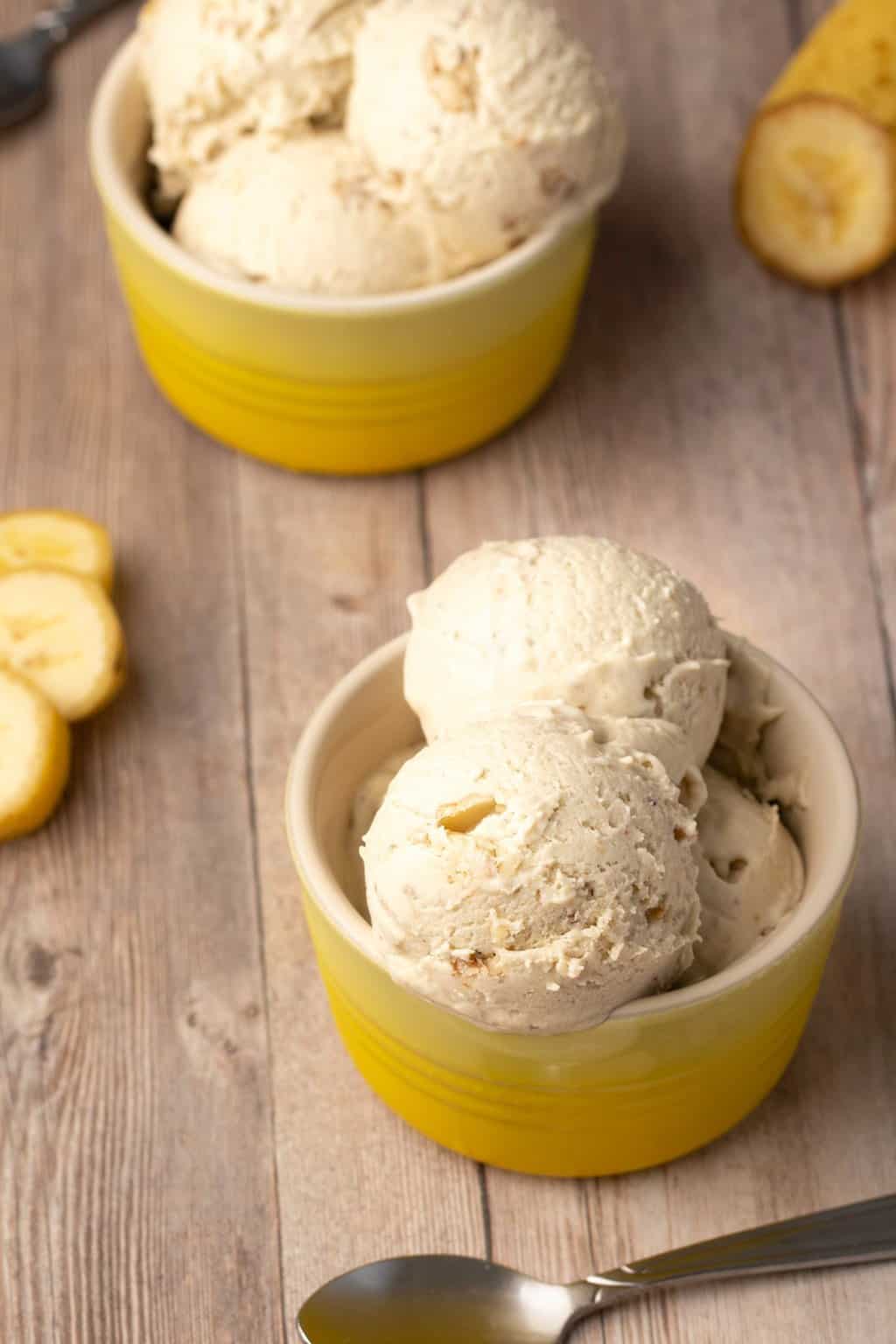 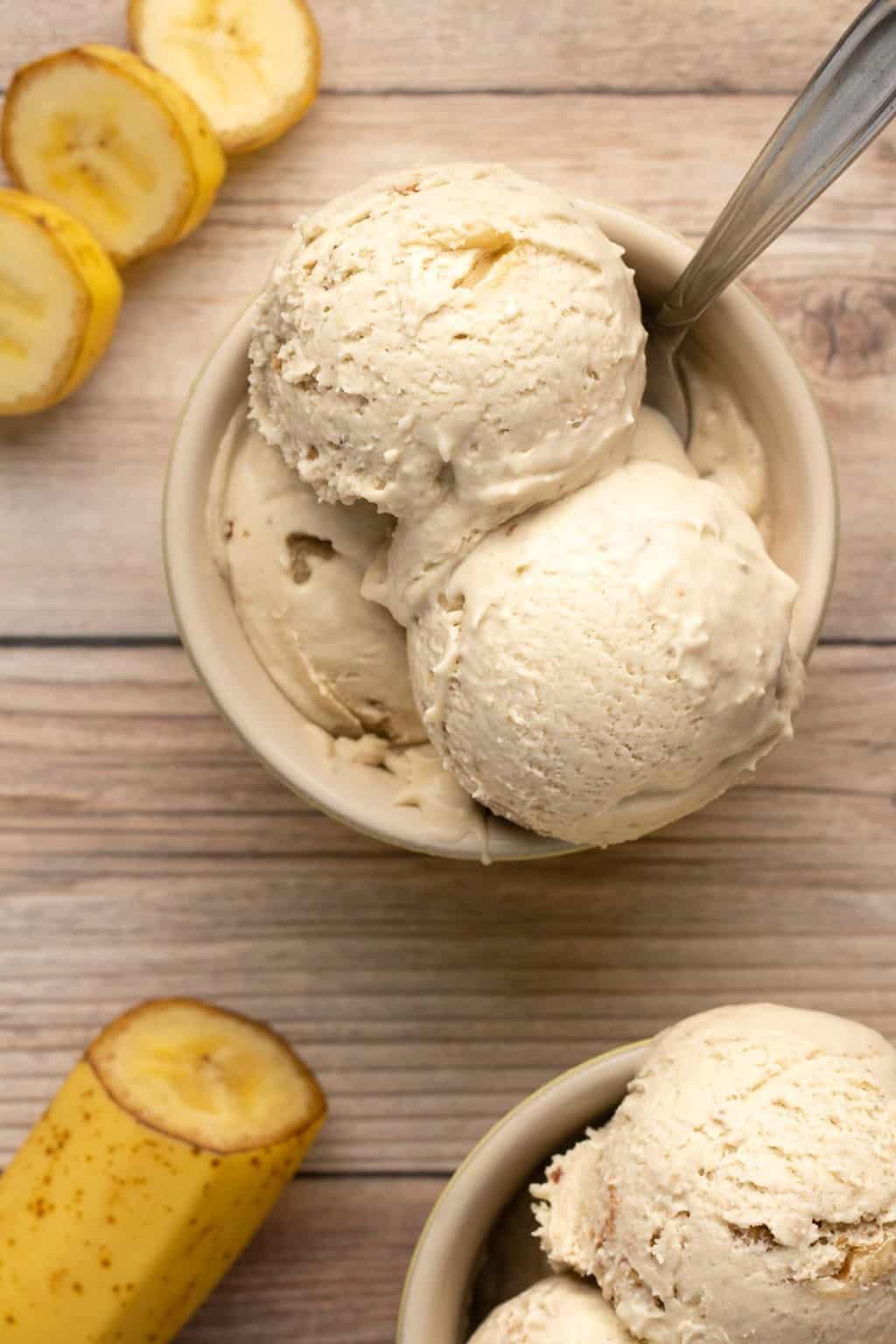 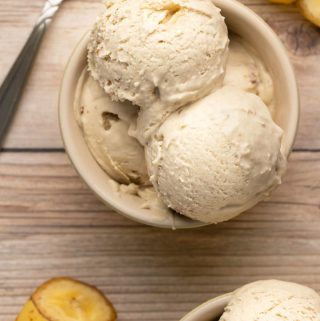 For the Roasted Bananas:

For the Ice Cream: