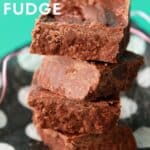 The most delicious old fashioned vegan chocolate fudge made with vegan condensed milk for a decadent dessert.

This vegan chocolate fudge is seriously decadent. It’s made the old fashioned way, and seriously it results in the BEST fudge.

The texture is melt in the mouth but also a little bit crumbly.

I’m not going to tell you that this is the easiest fudge to make, because truly, it’s not. There are easier recipes! Like our 3-ingredient vegan fudge or our vegan peanut butter fudge.

But honestly it is SO worth it. This is a type of fudge that may be called ‘old fashioned fudge’ or it may be called ‘Russian fudge’ or ‘tablet’ depending on where you are in the world. Growing up, we just knew this as ‘fudge’, and we were crazy about it!

This fudge keeps really well so it makes great gifts too!

So let’s get started.

You can use a store-bought option for vegan condensed milk and definitely don’t need to make it from scratch. Condensed coconut milk and condensed oat milk are both great options.

Golden syrup – we used golden syrup, but you can also use maple syrup.

Soy milk – we used soy milk but any non-dairy milk will work fine.

This is just a summary of the method, the full instructions and measurements can be found in the recipe card at the bottom of the post.

Basically, you take a mix of sugar, butter, condensed milk and milk (vegan versions for a vegan fudge of course) and bring it to the boil, and then you stir vigorously while it boils until it reaches soft ball stage according to your candy thermometer, which is a must for making fudge.

Then you beat the fudge as it cools and this is what makes it set into what we know as old fashioned fudge!

I have been a fan of using an electric whisk to take the hard work out of it, and this is exactly what I used in this recipe. That’s the reason for the pretty little ridges on top of the fudge, it literally sets while you are beating it.

But I tried a version doing only hand beating and this version came out a bit softer because I was able to judge the exact moment BEFORE it set and stop beating, so it retained a bit more softness.

So keep this in mind, I’ll provide instructions for both versions.

Sugar makes a great preservative, so this fudge keeps very well in the fridge for 2-3 weeks. It can also be stored at room temperature for 1-2 weeks. I like storing it in the fridge as it keeps the texture ‘snappy’. 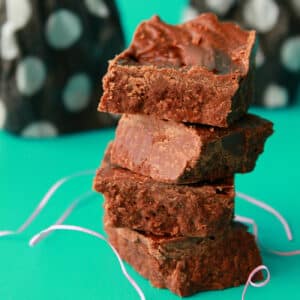