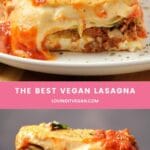 This vegan lasagna recipe is seriously decadent. Layers of vegan bolognese, vegan ricotta, vegan cheese sauce and marinara sauce make for the most delicious lasagna ever!

The last time I made a lasagna I called it the easiest lasagna because it really was so easy.

But this one? Well I’m not going to pretend this is a simple recipe. It has a few parts to it, but wow is it good! So good.

Everything except the marinara sauce and the lasagna sheets gets made up from scratch.

So yes, I can’t call this easy, but rewarding? Definitely!

And it feeds a crowd. You can feed at least 8 very hungry people from this dish. And they will be super impressed with you that is for sure.

For more amazing vegan dishes that feed a crowd check out our vegan cannelloni, our vegan pasta bake, vegan mac and cheese and vegan eggplant parmesan.

How To Make Vegan Lasagna

We made up a bolognese from scratch and the recipe is only slightly adapted from our vegan bolognese recipe. We adapted the recipe to make it less saucy, since it was going in this lasagna with lots of saucy things like marinara sauce and cheese sauce.

The vegan cheese sauce is an adaptation from our vegan white sauce (bechamel) and it works wonderfully for this lasagna.

If you see the top of the lasagna and that gorgeous crusty cheese, well that is this cheese sauce! We didn’t use any actual vegan cheese in this recipe, just this homemade cheese sauce.

The sauce is made with soy milk. We did try a version with coconut milk, similar to what we did for our vegan alfredo sauce and our baked vegan mac and cheese, but we really preferred soy milk for this. When combined with the other flavors in the lasagna it just worked out the best.

A deep dish is going to work best for this recipe because there are a lot of layers!

Top Tip: For the ricotta layer we used one full batch of homemade vegan ricotta. Of course if you have a store-bought option that you like, you are welcome to use that instead.

We used a store-bought marinara sauce, because we didn’t want to be busy ALL day making this! But if you have a favorite homemade marinara sauce you’d like to make, well, go ahead superstar!

The homemade vegan ricotta layer also really makes this lasagna special. But if you’re looking to save time and have a ready-made option that you can buy, you can definitely use that.

We used lasagna sheets that don’t need to be pre-cooked, because ain’t nobody got time for cooking that in advance!

The sliced zucchini layers are awesome because having some extra veggies in your lasagna is only a good thing. However, this can be omitted if you can’t get hold of any zucchini.

Some vegan garlic bread served on the side will never go amiss. A salad on the side like a vegan kale salad or vegan caesar salad would be awesome too.

The vegan ricotta can be made in advance, it can even be frozen if you need to make it far in advance and then thawed in the fridge when you need it.

The vegan bolognese can be made a day or two in advance and stored in the fridge.

The vegan cheese sauce can be made in advance and kept in the fridge for a couple of days. Give it a good whisk to make sure it’s smooth. It will thicken up in the fridge but this is okay.

Then you just need to assemble the lasagna and bake it when you’re ready. I don’t think it would be great to assemble it a couple of days before, just because it could cause your lasagna sheets to get mushy.

Leftovers keep very well in the fridge for 3-4 days and can be reheated slice by slice as needed! Or simply reheat the whole dish in the oven at 350°F until heated through.

This lasagna is also freezer friendly for up to 3 months if you’d like to freeze it. Thaw overnight in the fridge and then reheat as usual. 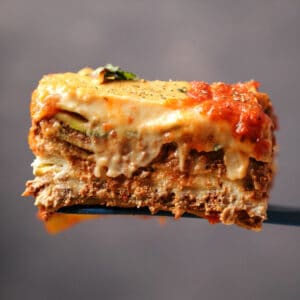 For the Vegan Bolognese:

For the Vegan Cheese Sauce:

For the Vegan Ricotta:

For the Marinara Sauce: