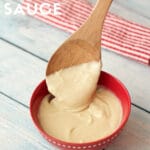 Vegan white sauce, also known as bechamel sauce. Basic 3 ingredient recipe that you can expand on with different flavorings. Creamy and delicious.

So your basic vegan white sauce has a lot of uses. It’s the basic recipe that with a few additions can turn into a vegan cheese sauce.

Also called a bechamel sauce, this is the white sauce you can use in lasagnas and other dishes that require a white sauce.

Since this is the vegan version, of course the dairy milk is replaced with plant based milk. Too easy really!

In this case I used soy milk but any plant based milk of your choice will do the trick.

I tried a version using vegan butter and the butter flavor was pretty strong.

I wasn’t a huge fan but I liked it more than Jaye who wasn’t a fan. He was all like: ‘aarrgggg butter sauce, I just ate a heap of butter in a sauce!’

Well, needless to say, he didn’t! It was just a little butter in a lot of sauce, but whatevs.

So the next time I made it with olive oil and I thought it tasted heaps better, and Jaye agreed.

In fact this one was so delicious that we’ve made it a lot since then.

And I used it in a lasagna dish that came out beautifully.

It’s a creamy dreamy white sauce that is like a blank canvas. You can add any flavorings to it that you choose, like garlic or herbs or whatever you desire!

The basic recipe is just 3 ingredients, and after that it’s up to you how you flavor it.

We’ve just gone with some sea salt and black pepper, but fresh herbs would be great, dried herbs, garlic spice, chilli, mustard, whatever you’re in the mood for. 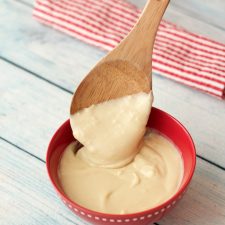