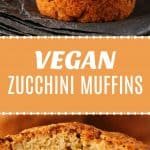 Wholesome and delicious vegan zucchini muffins. These vegan muffins are moist, filling, easy to make, and fabulous as is or spread with vegan butter. 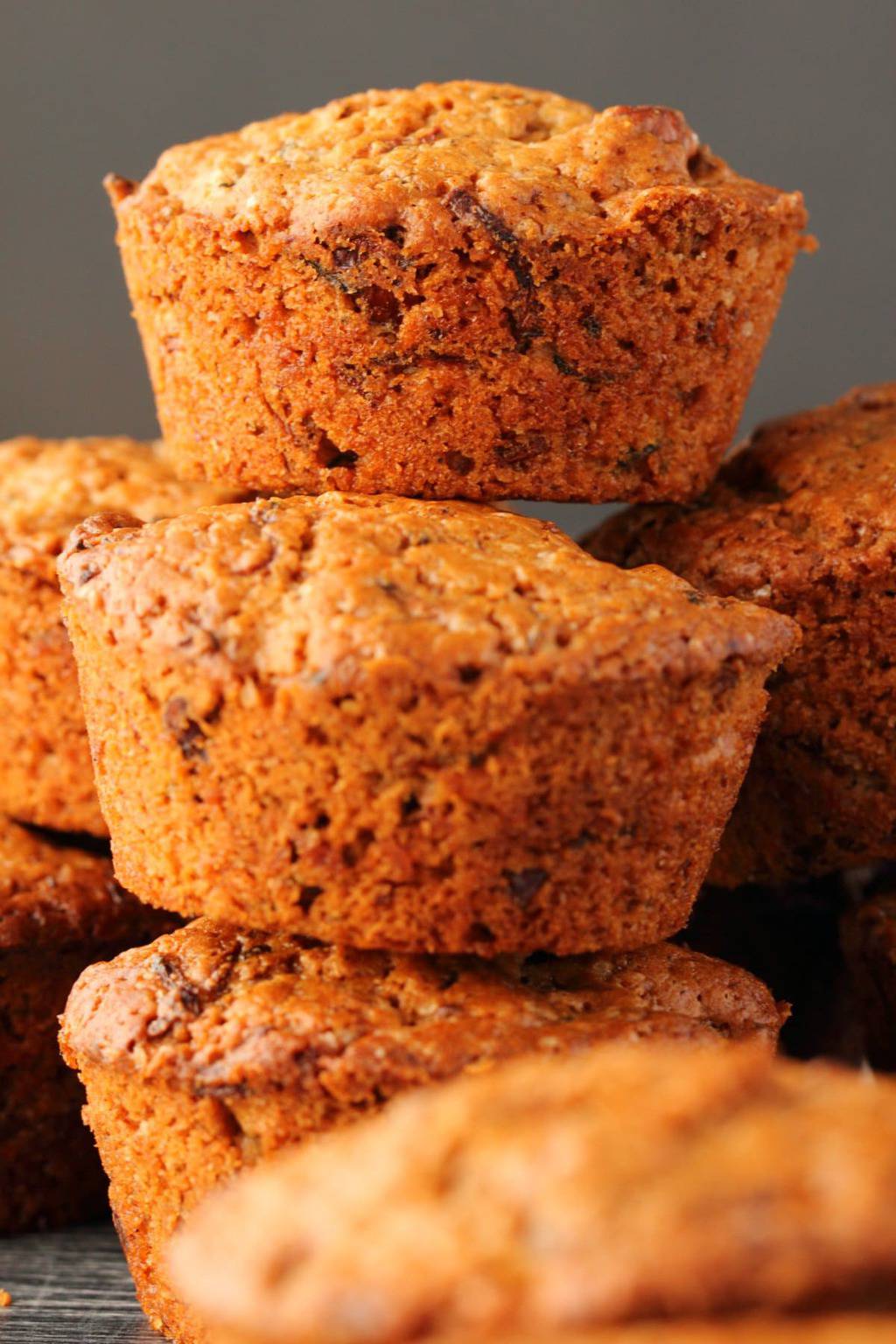 So ever since making my vegan chocolate zucchini cake I’ve been super keen to try putting zucchini in other baked goods, and these vegan zucchini muffins were it!

And…they are super good! They taste wonderful while also having this wholesome feel.

And now I’m going to include a batter shot below that is not super pretty looking, but I had to show it so you can see how thick this batter is. I know that if I don’t show it some people will be trying to make this and then saying I must have made a mistake with the recipe, there must be more liquid required! 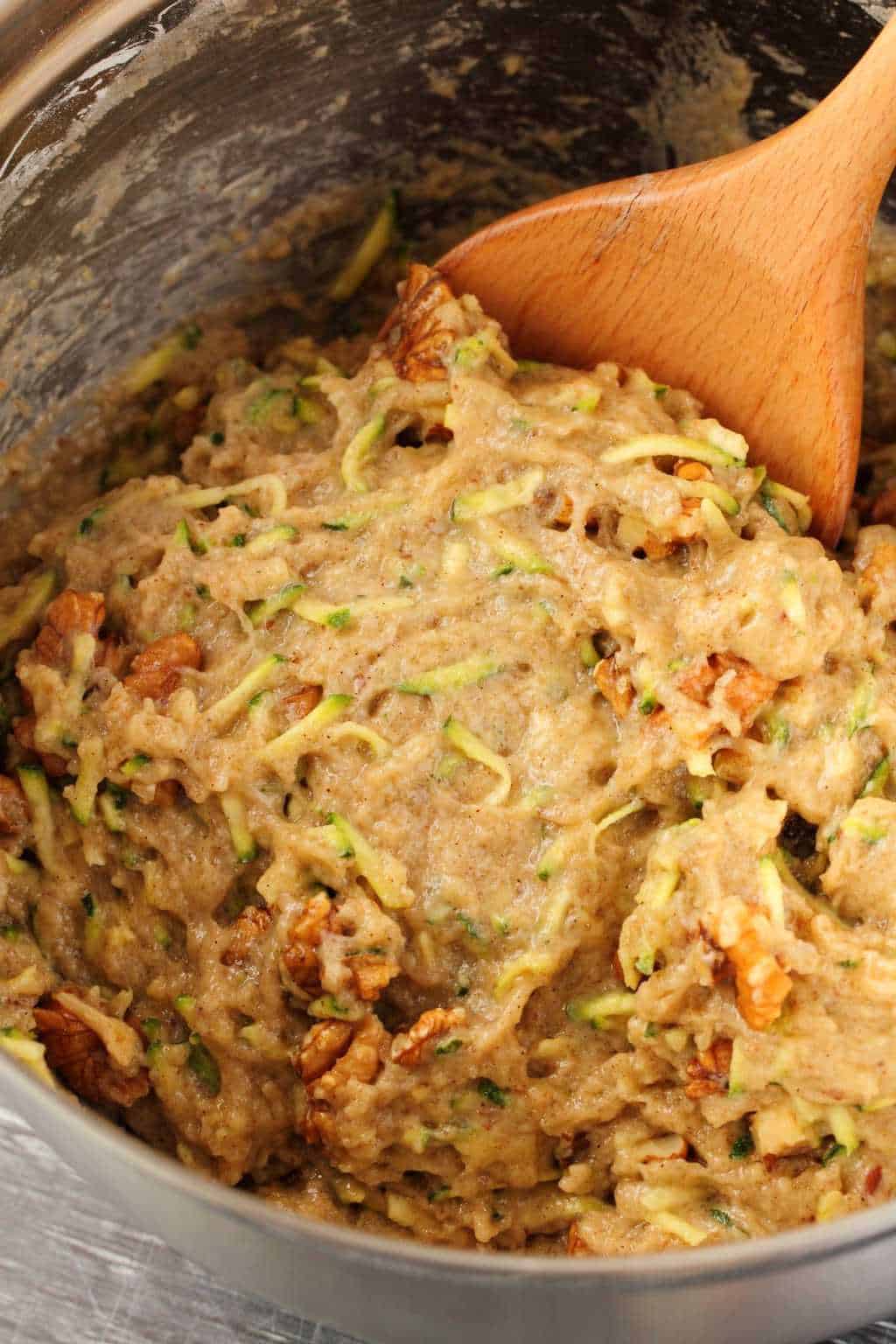 But no, it is supposed to be super thick. You start mixing it, and then you might have to let the batter sit for a couple of minutes and then mix it again, so that the zucchini releases more of its moisture into the batter and somehow it all comes together. It has to be thick, because zucchini is such a moist ingredient that once baked, you have the most perfectly moist zucchini muffins.

You’ll spoon the batter into the muffin partitions, it definitely won’t pour! 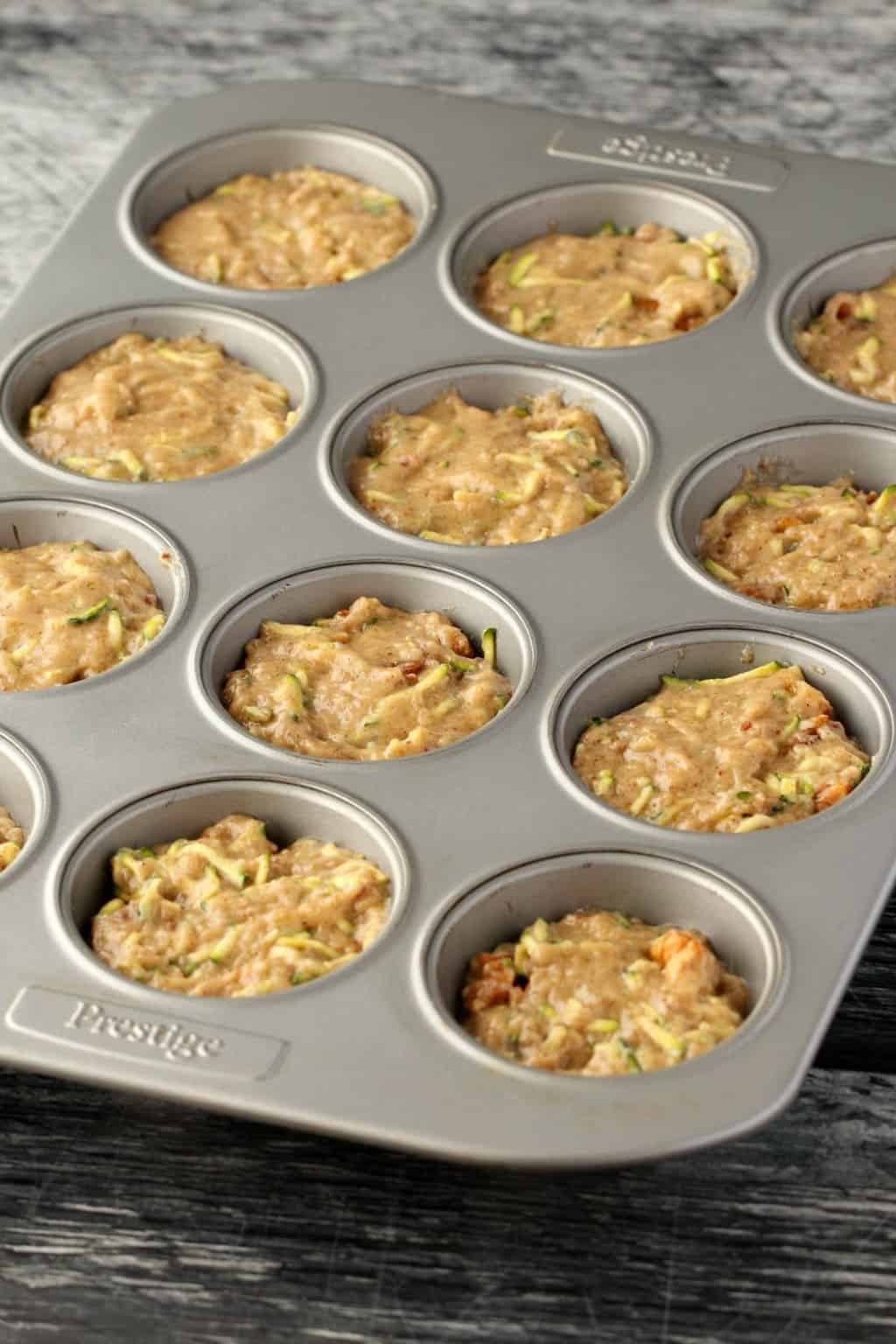 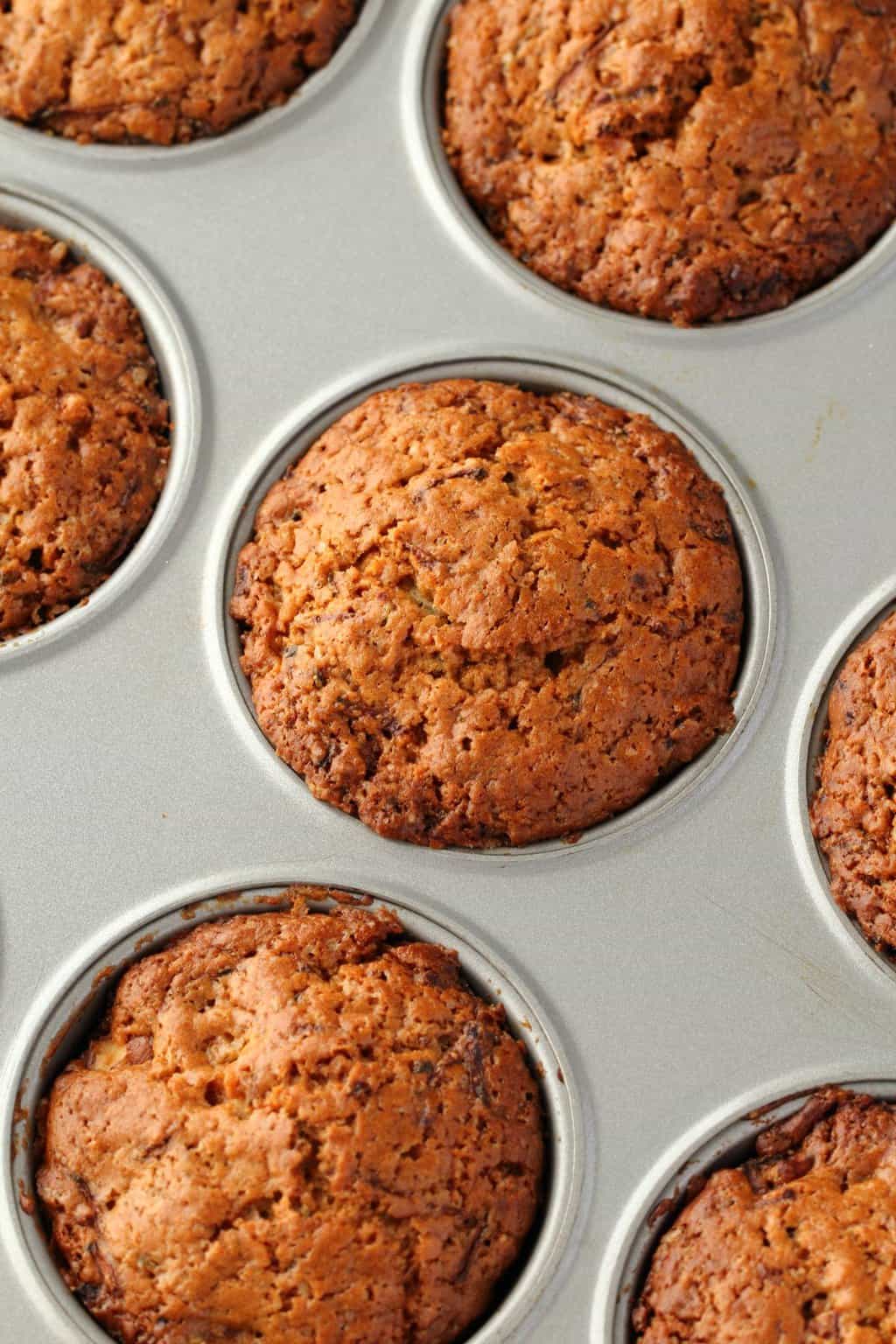 It is super important that you don’t use too much flour though, and since flour is a tricky measurement (and cup sizes across the world are different!), weighing it on a food scale is the best option.

If you’re not going to weigh the flour then make sure you use the correct technique for measuring flour which is ‘spoon and level’, you have to fluff up the flour, spoon it into the cup and then level it off with a knife. Don’t pack it in, it has to be spooned and levelled (and use a US cup measure), otherwise you can accidentally use more than required. Which is why weighing is often a very good idea for accuracy. 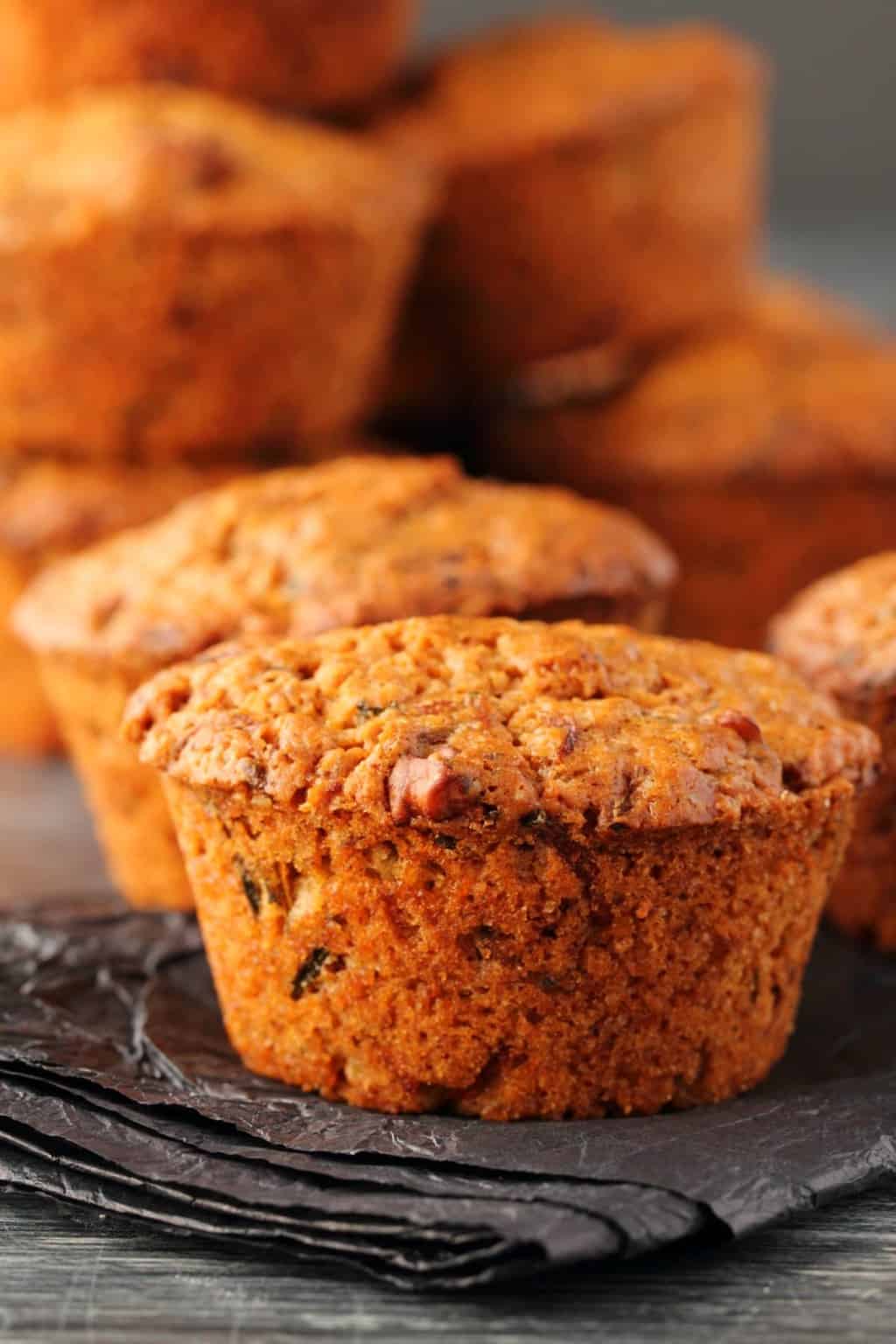 If you did accidentally use too much flour then your batter will be too thick to mix and you’ll need to compensate with a bit more liquid, but I’m hoping you’ll weigh the flour so that won’t happen and you’ll get a consistent result.

The zucchini is shredded up before going into the batter and the easiest way to do this is in a food processor. You can grate it by hand but it would take much longer.

And if you’re wondering: why the heck use zucchini in baked goods? Well the answer is – they provide heaps of moisture, without adding flavor! So you don’t taste any zucchini in the final product, but you get deliciously moist baked goods as a result. The zucchini cooks down so that there’s almost no trace of it in the final product (okay yes you can see a tiny bit of green in these muffins, but trust me they don’t taste like green vegetables!).

And then I also used walnuts in these and I really think the walnuts take these muffins to the top levels of deliciousness! Of course if you have a nut allergy you can just leave them out or add in some raisins! I think that would be super good with these too. 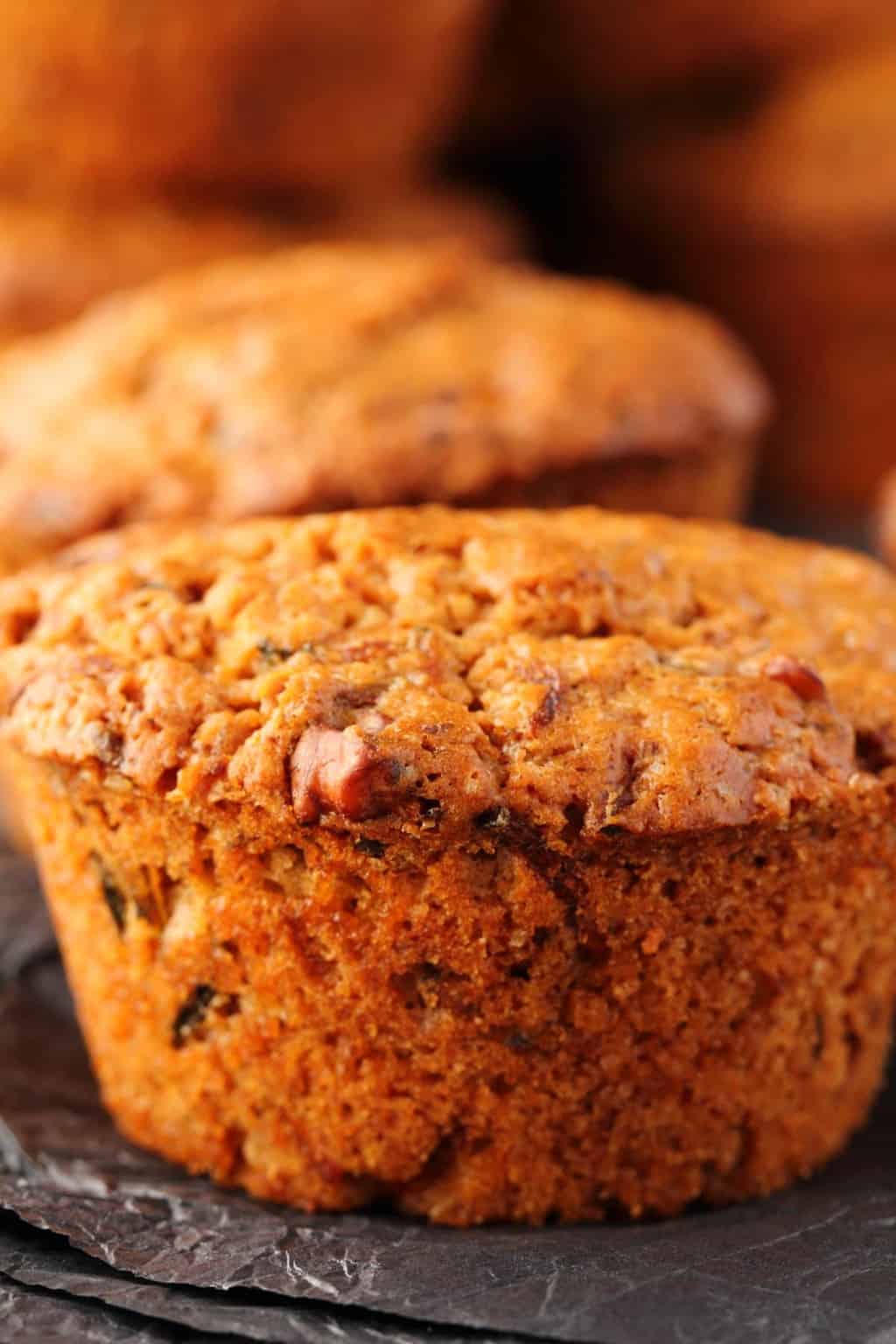 I hope you’ll enjoy these vegan zucchini muffins, they are:

They are awesome to eat exactly as is, but I’m also a fan of cutting them in half and putting on some vegan butter. Keep them covered at room temperature and they’ll stay fresh for up to 5 days. 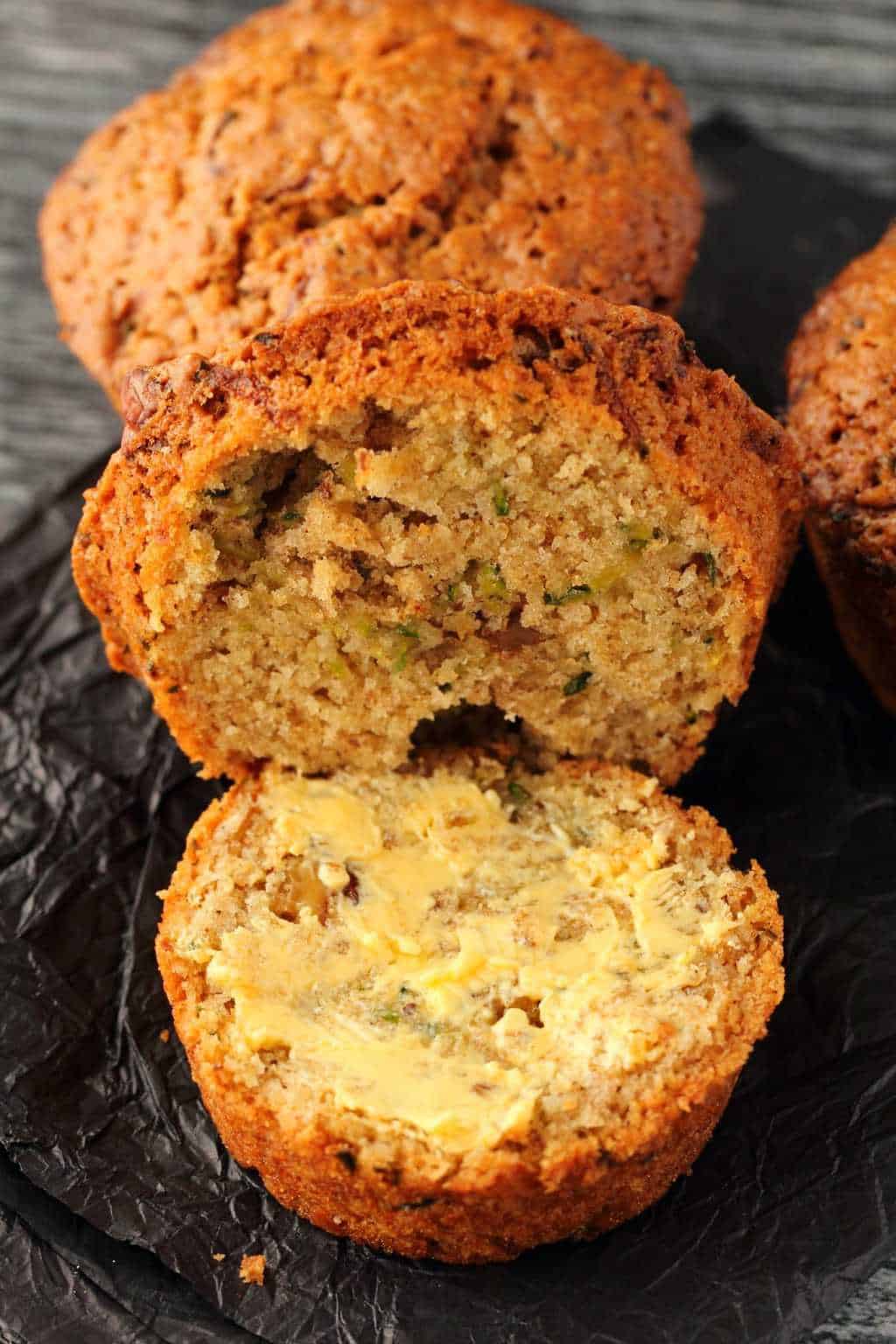 What do you think of these vegan zucchini muffins? Let me know in the comments and shoot any questions my way (and rate the recipe too please, thanks!).

For more fabulous vegan muffins, check out these recipes:

While you’re here, why not sign up to our email list? You’ll get an awesome (free) recipe ebook containing 10 vegan dinner recipes from the blog and you’ll be the first to know when new recipes are posted! 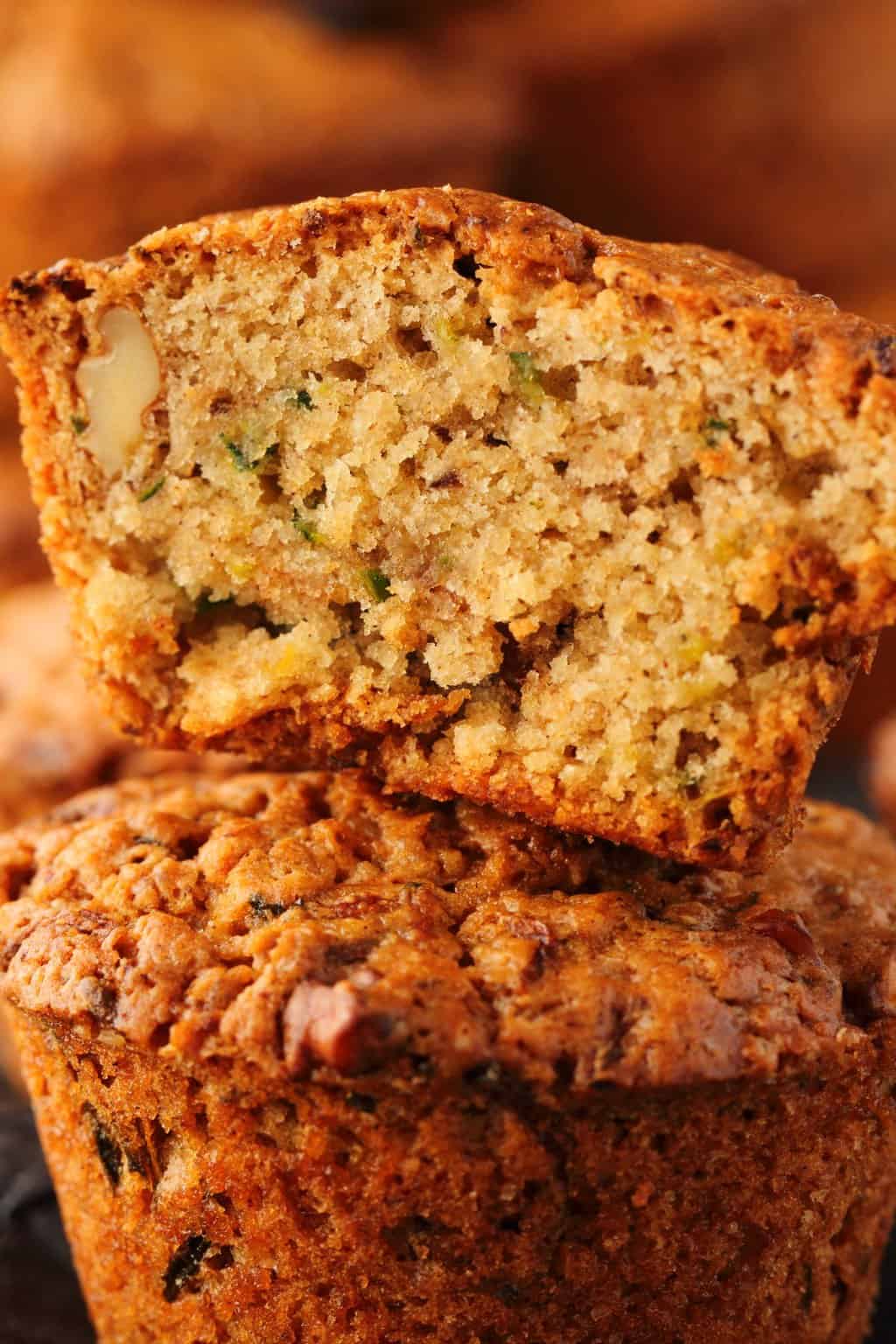 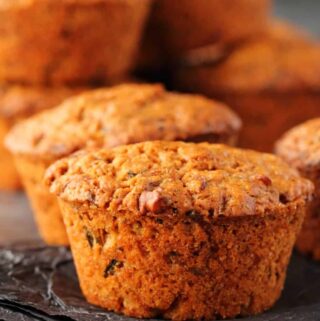