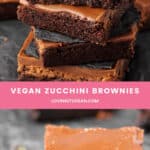 Fudgy and rich vegan zucchini brownies with a chocolate fudge topping. Mega-chocolatey and so easy to make, and you’ll never know there’s zucchini in them!

These vegan zucchini brownies are so chocolatey and fudgy!

All that, and they’re covered with a seriously amazing chocolate fudge topping.

When it comes to brownies you get ‘cakey’ brownies and ‘fudgy’ brownies. Cakey brownies are more like cake. I’m a fan of the fudgy brownies.

The difference between cakey brownies and fudgy brownies comes about from the amount of oil you use.

I tried these brownies with 3/4 cup of oil and they were good, but they were definitely falling on the ‘cakey’ side. So I increased the oil to a full cup and then I got that fudgy brownie perfection that I was going for.

The zucchini in these brownies adds a lot of moisture, which is why I initially thought 3/4 cup of oil would be plenty, but to get your brownies to the perfect state of fudginess you just can’t be shy with the oil.

How To Make Vegan Zucchini Brownies

The topping is made on the stovetop and isn’t like a regular frosting at all, more like a chocolate fudge sauce that hardens beautifully.

You make it by melting some vegan butter in a saucepan and then adding sugar and soy milk and bringing it to a full rolling boil, then you remove it from the heat and stir in vegan chocolate until melted in, and then pour it all over the top of the (still warm) brownies.

The batter is very dry for this. So don’t panic and think I’ve left off an important ingredient from the recipe card. It’s all there, you just have to be a little patient when mixing the batter. Start mixing it, and then leave the bowl for a couple of minutes, come back to it and mix again.

Leaving it for a couple of minutes will allow the moisture from the zucchinis to seep into the other ingredients and suddenly it will come together perfectly. It’s a super thick batter but that’s how it’s supposed to be.

The zucchinis: There is no need to peel your zucchini before shredding it for this recipe. You want it to have all the moisture, so don’t squeeze out any water from the zucchini either, it should all go into your batter.

The zucchini basically makes your batter look pretty odd, but the end result is indistinguishable from regular brownies since you don’t taste the zucchini, or see any trace of it, once baked. So you get some hidden veg in with your dessert, which is such a great concept.

The fudginess: It’s not just the oil that we’re not shy with in this recipe, it’s the sugar too! Perfect fudginess requires lots of cocoa, lots of sugar and lots of oil along with two full cups of shredded zucchini.

The topping: The topping is optional, of course. We love it, but if you’re the type of person who tends to not like things to be too sweet, then you’ll probably prefer to leave it off.

Just serve your brownies with some vegan whipped cream. Unsweetened. That will be super delicious for those without that much of a sweet tooth.

But for everyone else, you’ll love this chocolate fudge topping. Don’t skip it.

Store the brownies in an airtight container in the fridge where they will stay delicious for up to 5 days. You can enjoy them as is, or heat them up a little in the microwave first before serving.

They are also freezer friendly if you do want to freeze some.

Fudgy and rich vegan zucchini brownies with a chocolate fudge topping. Mega-chocolatey and so easy to make, and you’ll never know there’s zucchini in them!

For the Zucchini Brownies:

For the Chocolate Fudge Topping:

*The instant coffee powder enhances the chocolate flavor of the brownies, and does not cause them to taste like coffee at all. However you can omit this if you prefer. You can also use finely ground coffee rather than instant coffee.

*The zucchini does not need to be peeled first before shredding. Also don’t squeeze the zucchini to remove water from it, you want to use all the moisture for your batter.

*You can switch soy milk for almond milk in the topping if you prefer.

*You can use any vegan chocolate it doesn’t have to be chocolate chips, just break it up into small pieces first and make sure the amount is correct by weight.

*If your measurements are not exactly the same for your quarter sheet pan (there can be a little variety in the sizes) then don’t worry, a small amount larger or smaller shouldn’t make a difference, as long as it is a quarter sheet pan (and not a half sheet) this should work out fine.

*This recipe was first published in October 2018.

Loving It Vegan is a participant in the Amazon Services LLC Associates Program, an affiliate advertising program designed to provide a means for sites to earn advertising fees by advertising and linking to Amazon.com. This site may contain some of these links to Amazon.com. If you make a purchase through one of those links, Loving It Vegan will receive a small commission from the purchase at no additional cost to you.
Previous Post: « Vegan Gyros
Next Post: Eggplant Dip »